The United States exported 836 million gallons of non-beverage ethanol in 2015, nearly all of which was used for fuel. This volume was unchanged from the previous year and remained the second highest volume on record. Despite a two-year decline in U.S. ethanol exports following the record 1.2 billion gallons in 2011, overall exports have trended upward since 2009. 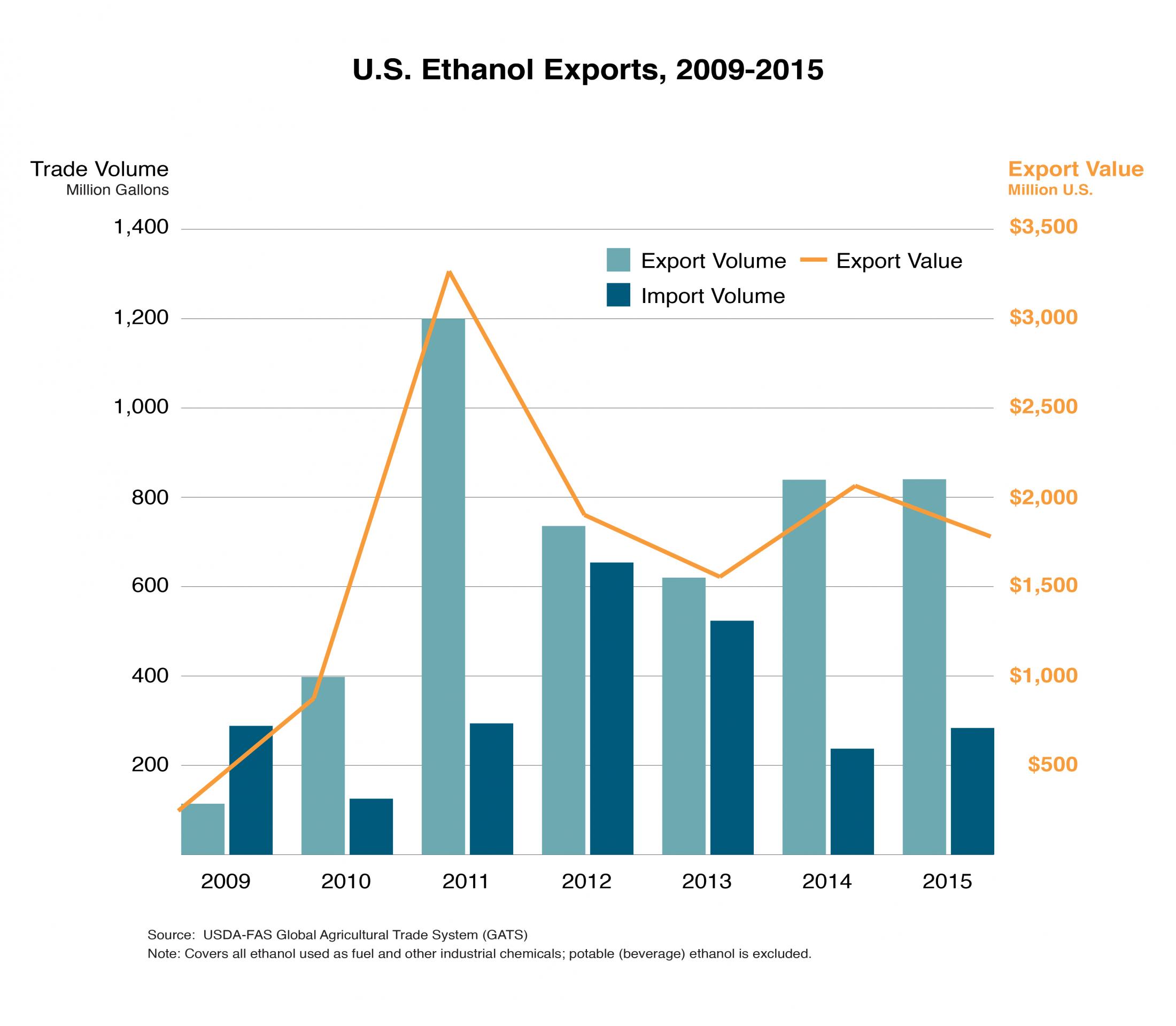 The value of U.S. ethanol exports was $1.8 billion in 2015, down 14 percent from $2 billion in 2014, due to lower prices. Over the past two years, lower ethanol prices and more diverse export destinations helped sustain higher export volumes despite collapsing oil prices and a stronger U.S. dollar. The advantage of increased market diversity was demonstrated in 2015 when record sales to China, Korea and India more than offset a sales downturn to Canada, the United States’ top market.

The U.S. share of global non-beverage ethanol exports remained at 50 percent in 2015. The United States’ export reliance (the percent of production exported) and the portion of the U.S. corn crop supporting ethanol exports both remained largely unchanged over the past two years.

U.S. ethanol exports have trended upward since 2009, with the notable spike in 2011, when sales jumped to a record 1.2 billion gallons. This record was the result of three events that caused U.S. exports to surge above trend, adding as much as 720 million gallons to export sales.

First, Brazil’s drought in 2010/11 resulted in a poor sugarcane crop and a swing toward more cane crushed for sugar in response to higher sugar prices. This supply shock reduced Brazil’s domestic and exportable supplies of ethanol. The result was a 360-million-gallon increase in U.S. ethanol exports to Brazil and other foreign markets to replace Brazilian shipments.

Third, the European Union (EU) began importing lower priced U.S. ethanol and blending it into E90 (a 90-percent blend of ethanol in gasoline) to meet its own increasing domestic mandates and to substitute higher priced Brazilian supplies. The EU imported 296 million gallons of ethanol from the United States, a 54-percent increase from 2010.

Following the 2011 record export year, U.S. sales to Brazil immediately returned to trend in 2012 as the Brazilian sugarcane industry recovered from drought. At the same time, and extending through 2013, U.S. exports to the EU collapsed from a record 296 million gallons in 2011 to a mere 27 million gallons. This was largely the result of higher import tariffs following the EU’s reclassification of E90 in 2012, and the application of anti-dumping duties on U.S. ethanol in 2013. Helping mitigate an even larger collapse in U.S. ethanol exports from 2011 to 2013, U.S. sales rose to other markets, most notably to the Philippines, Peru and India.

Despite falling oil prices and a stronger dollar, U.S. ethanol export volumes remained at the second-highest level on record in 2014 and 2015 and one-third above 2013 shipments. Since 2013 a decline in U.S. ethanol prices helped maintain volume sales. But U.S. exporters also benefited from a more diverse export portfolio with sales gains to previously less-important markets and a surge in import demand from China.

Since 2013, more than 96 percent of U.S. ethanol exports have been for fuel use, with the favorable price spread between U.S. fuel ethanol and wholesale gasoline prices in overseas markets having an impact on foreign demand for U.S. ethanol. The Brent price for crude oil fell from $100-125 a barrel in 2011-2013 to less than $40 a barrel by late 2015. U.S. ethanol prices also fell due to declining feedstock prices, but not nearly as much as oil prices. Varying country tax policies for gasoline and fuel ethanol make complete price comparisons difficult, but the blending economics in many markets have turned against ethanol suppliers because of diminishing demand for discretionary blending (blending that is driven by economics above mandated levels).

Exchange rates also worked against U.S. ethanol exporters over the past two years, but the only significant foreign market that suffered an overall decline in U.S. shipments was Canada. Exports to Canada, the United States’ largest market, rose slightly in 2014, as discretionary sales above minimum mandate use continued despite an eight-percent increase in the U.S. dollar. Then, in 2015, U.S. exports to Canada fell 25 percent with a further 20-percent appreciation in the U.S. dollar.

By contrast, U.S. ethanol exports rose to most other markets during the past two years, while the U.S. dollar appreciated 7-13 percent against those currencies. Lower product prices helped offset this adverse exchange rate adjustment. During the 2014-15 timeframe, the average export unit value of U.S. ethanol fell 15 percent to $2.13 per gallon.

The market for U.S. ethanol exports has become more diversified over the past two years. Following the decline of sales to Brazil and the EU, the portion of total exports shipped to the top five markets fell from 79 percent in 2013 to 68 percent in 2015. Canada, Brazil and the Philippines remained top destinations from 2013 to 2015, but smaller markets, especially South Korea and India, became more important. In addition, the United States exported significant quantities of ethanol to China for the first time in 2015, making it the fourth-largest market for the year.

These three overseas markets were instrumental to diversifying the U.S. ethanol export market in 2015:
China: U.S. ethanol exports to China increased 20-fold in one year to a record 71 million gallons in 2015. Previously, U.S. ethanol exports to China were small and excluded fuel. China’s ethanol imports surged in 2015 because imported ethanol was cheaper than domestic supplies and importers were allowed to test the international market for imports. China primarily uses corn to produce fuel ethanol, and following Brazil and the EU, China is the fourth-largest fuel ethanol market with use mandates in six provinces and 27 cities. China’s price support scheme for corn, originally established to safeguard farmer incomes and ensure food security, has resulted in internal prices for corn far above world prices. High feedstock costs inflate domestic ethanol prices and make imports more attractive.
Korea: U.S. ethanol exports to Korea increased 55 million gallons over two years to a record 60 million gallons in 2015. More than 90 percent of these shipments were intended for fuel use, which is a change from previous years when more non-fuel, industrial ethanol was shipped. Korea has not yet set an ethanol mandate, but there is interest to do so given its high dependency on crude oil imports and interest to reduce emissions. A roadmap has been set by the Ministry of Environment to begin distributing E3 and E10 in selected cities this year and E10 nationwide by 2035.
India: U.S. ethanol exports to India increased 26 million gallons over two years to a record 47 million gallons in 2015. These imports are reportedly used in the industrial chemicals market, thus freeing up domestic supply for fuel use. India fuel ethanol use-mandates are repeatedly missed due to unsupportive regulatory and taxation policies as well as periodic weather-related shortfalls in feedstock (sugarcane) supply.