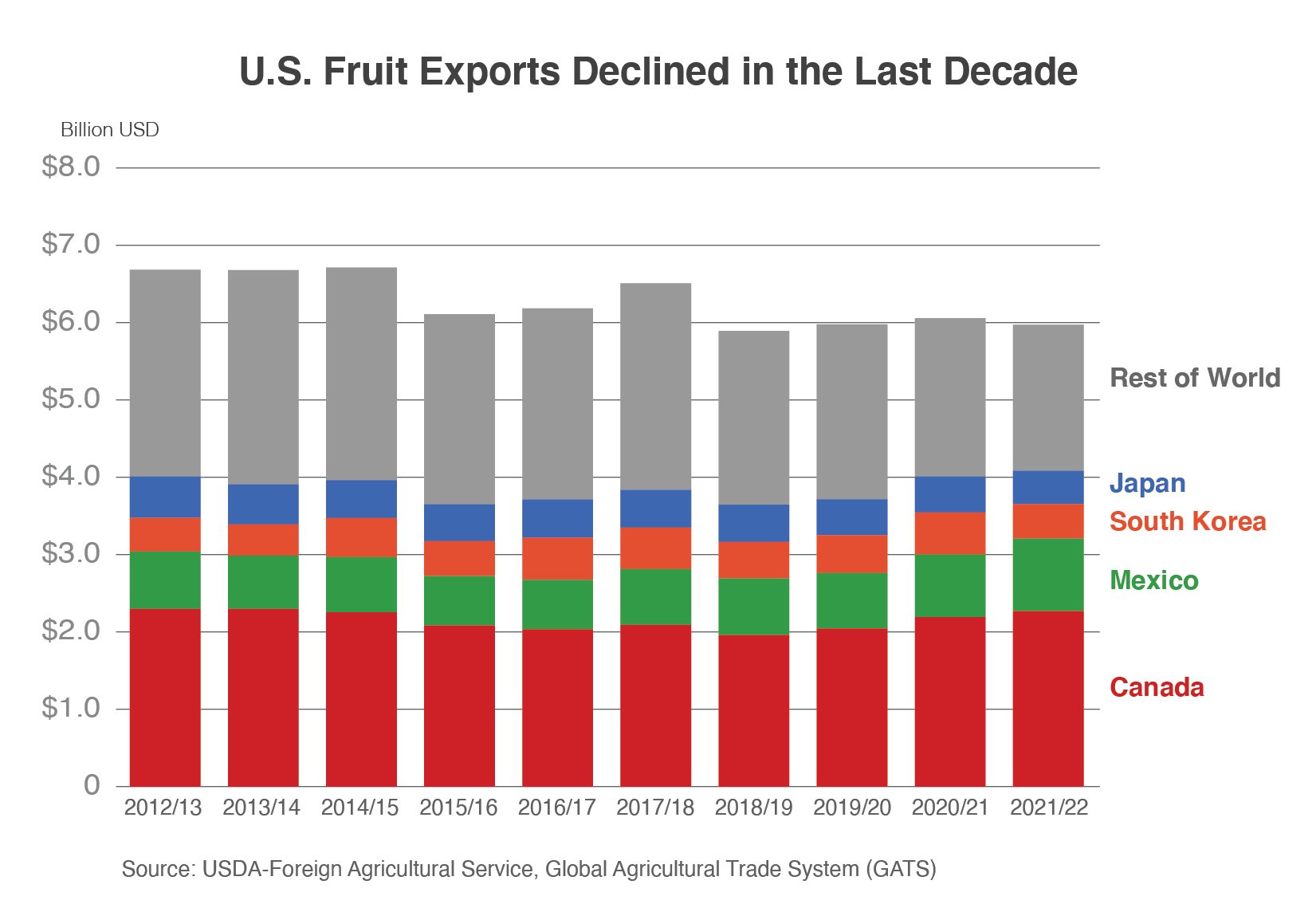 The volume of U.S. fresh, dried, and processed fruit exports between 2012/13 and 2021/22 dropped 29 percent to 2.9 million metric tons1. However, a 25-percent gain in unit value during this period softened the decrease in value to just 11 percent lower as trade dropped $700 million to $6.0 billion. A contributing factor to lower export volumes was a contraction in production for most of the top export commodities. However, this situation was partially offset by rising exports to Canada and Mexico due to the U.S. advantage as a border country transporting perishable goods as well as differences in growing seasons between the United States and other countries supplying these markets. In 2021/22, top U.S.fruit markets were Canada, Mexico, the Republic of Korea (South Korea), and Japan, and top commodities included apples, grapes, strawberries, oranges, and cherries. 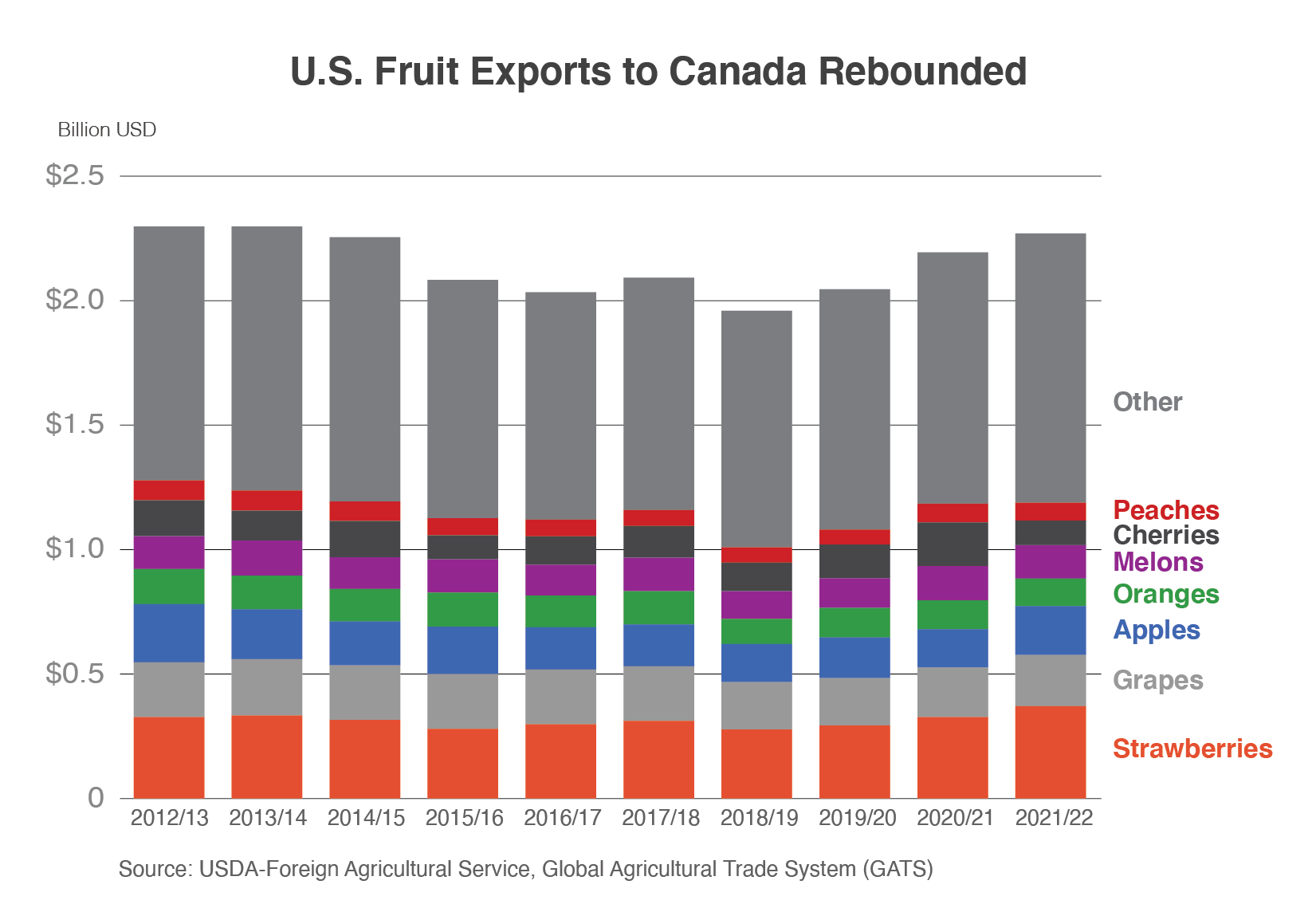 During the last 10 years, U.S. exports to Canada declined for several years before staging a rally to finish nearly unchanged at $2.3 billion. In 2021/22, top commodities included strawberries ($371 million), grapes ($206 million), and apples ($196 million). Canada was the top U.S. strawberry and grape market and second-largest apple market. 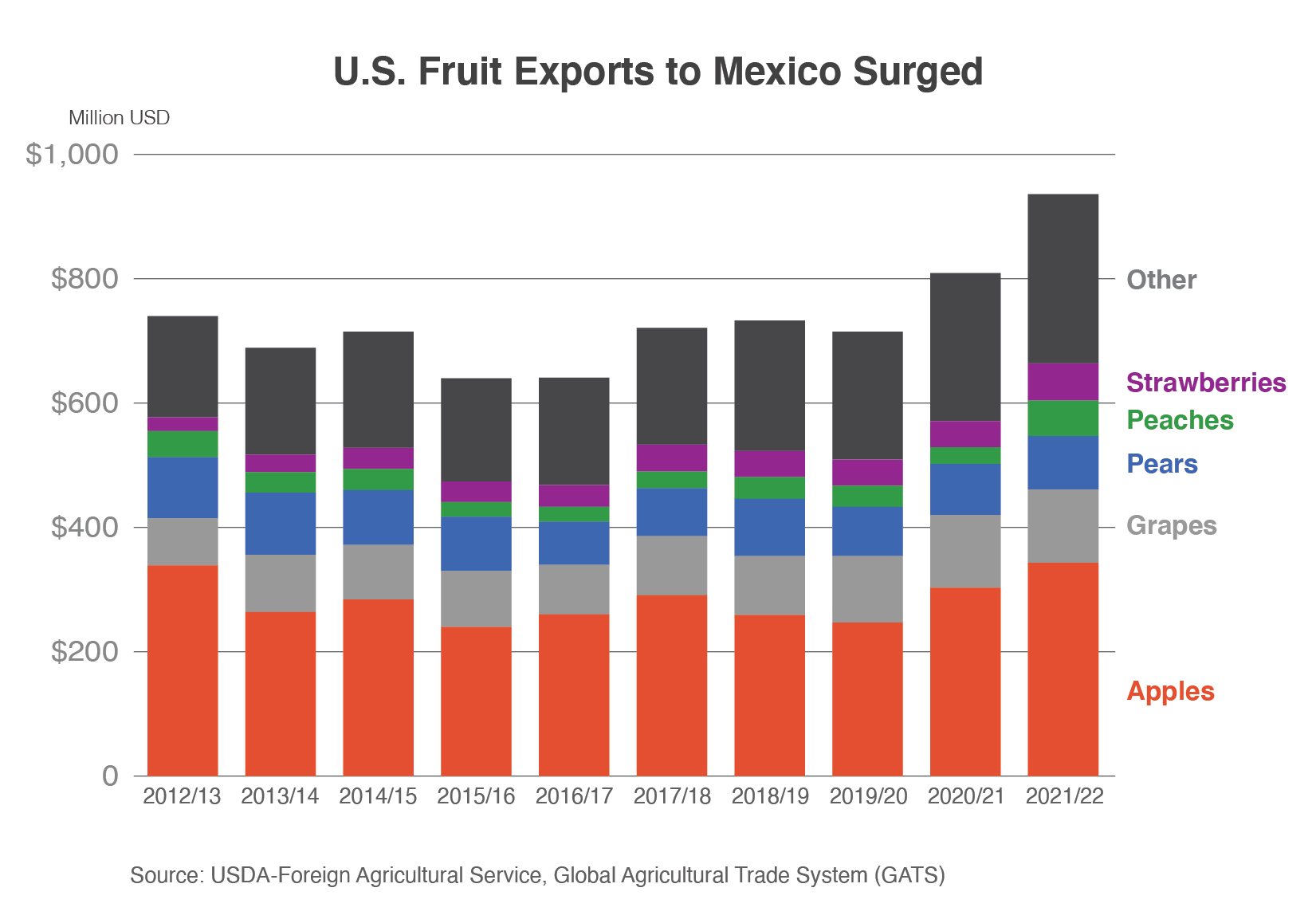 U.S. exports to Mexico in the last 10 years rose nearly $200 million to $936 million, most of which occurred during the last 2 years on strong apple shipments. In 2021/22, top commodities included apples ($343 million), grapes ($118 million), and pears ($86 million). Mexico was the top U.S. apple and pear market and second-largest grape market. 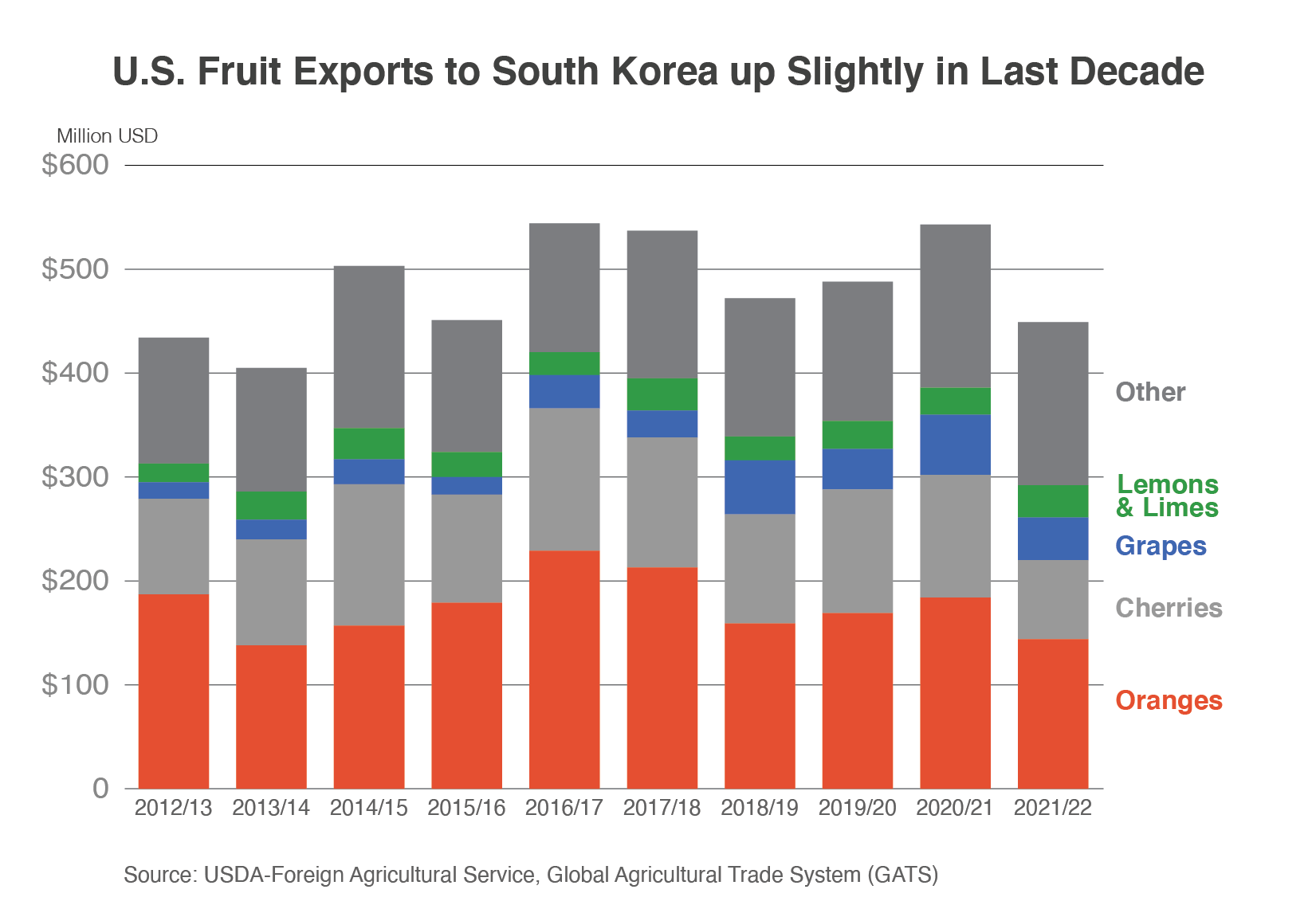 U.S. exports to South Korea in the last 10 years were up $13 million to $448 million, but top commodities oranges and cherries have been declining for several years. In 2021/22, exports were driven by oranges ($144 million), cherries ($76 million), and grapes ($41 million). South Korea was the top U.S. orange market, second-largest cherry market, and fourth-largest grape market. 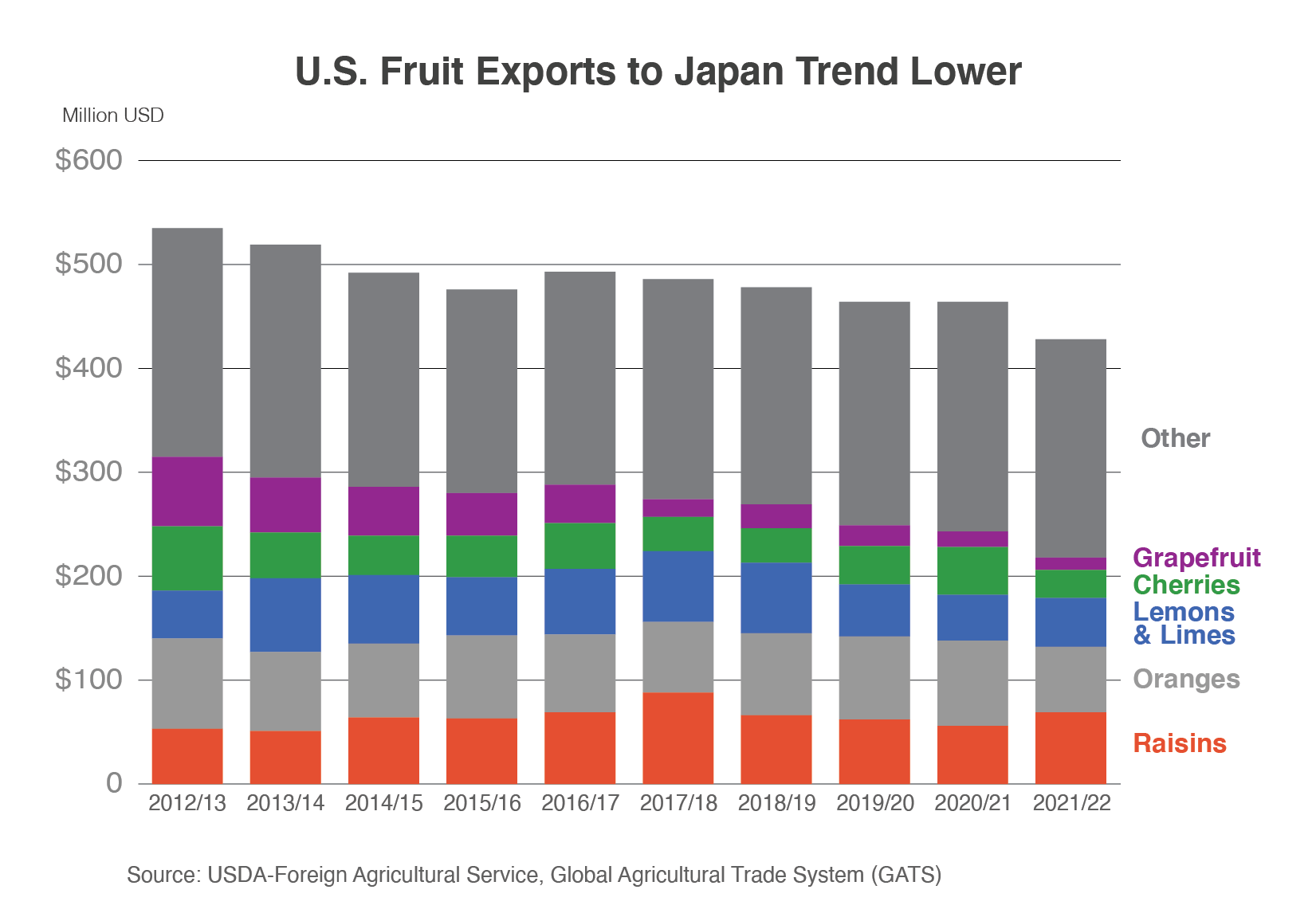 U.S. exports to Japan during the last decade dropped $106 million to $429 million, driven by a sharp reduction in exportable supplies of grapefruit. In 2021/22, top commodities included raisins ($69 million), oranges ($63 million), and grapes ($42 million). Japan was the top U.S. raisin market and third-largest orange and grape market.

These top markets accounted for about two-thirds of U.S. fresh, dried, and processed fruit exports. Key gains to these markets during the period included grapes and strawberries but were largely offset by losses from oranges, cherries, and apples.

1 Split-year references for trade data refer to July through June.