Two-way agricultural trade between the United States and Southern Africa has grown significantly in the past decade, reaching a record $1.5 billion in 2017. The region imported $14 billion in agricultural and related products last year and the potential for U.S. export growth is strong, given that many of these are products that the United States produces competitively. USDA’s Foreign Agricultural Service (FAS) defines the Southern Africa region as the countries of Angola, Botswana, Lesotho, Madagascar, Mauritius, Mozambique, Namibia, South Africa, eSwatini (formerly Swaziland), Zambia, and Zimbabwe. The region is home to 167 million people. 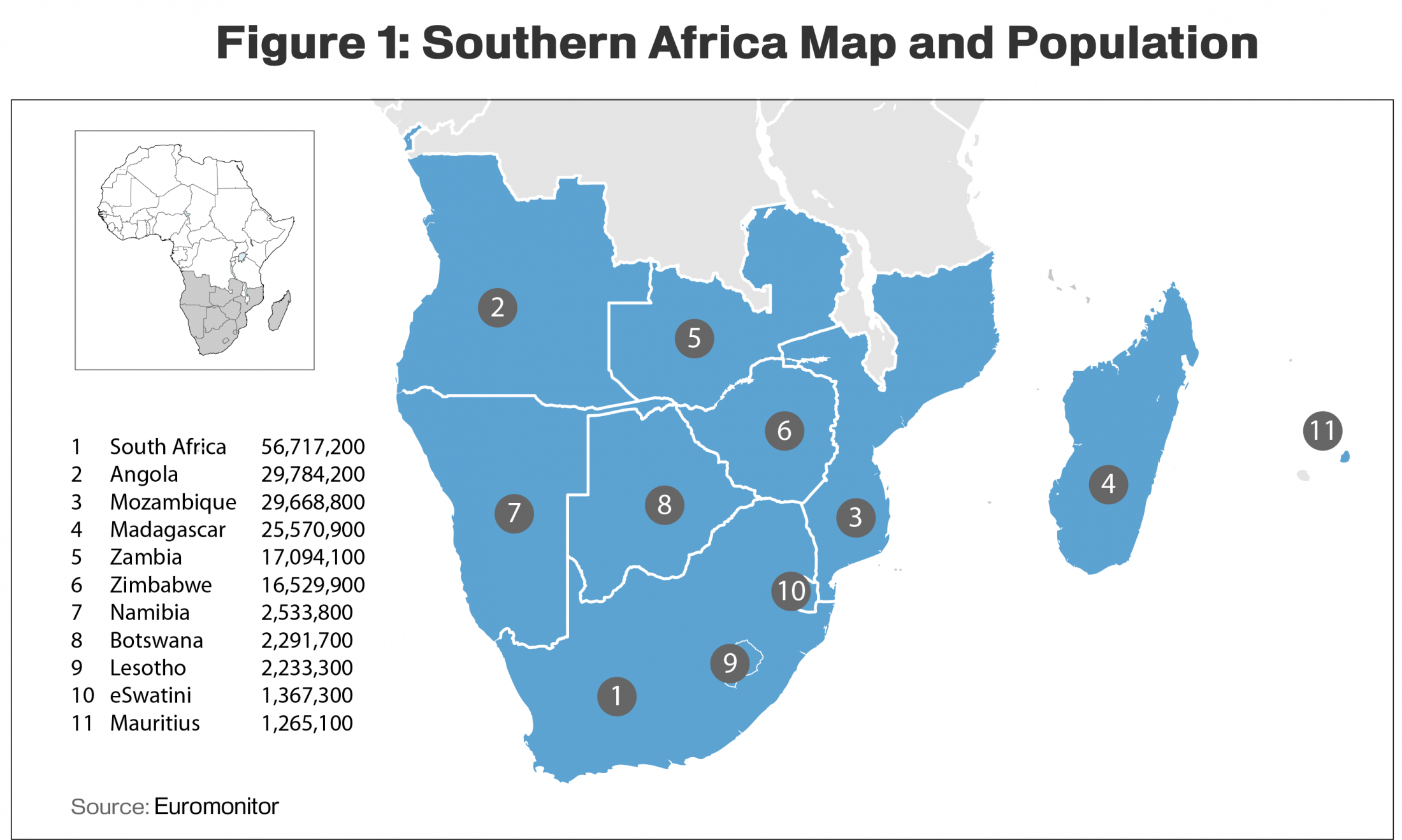 Among the countries in Southern Africa, the World Bank classifies Angola, Botswana, Mauritius, Namibia, and South Africa as upper middle-income economies with per capita income of between $4,408 and $9,794. Lesotho, eSwatini, Zambia, and Zimbabwe are classified as lower middle-income economies, while Madagascar and Mozambique are classified as low-income economies. The World Bank estimates average annual population growth in Sub-Saharan Africa, of which Southern Africa is a part, at 2.7 percent, with real GDP growth for the region at 2.6 percent. South Africa and Angola, the two strongest economies of the Southern Africa region, are projected to experience increased overall economic growth in 2018, as the business environment improves. A growing middle class and large scale rural-to-urban migration have created strong demand for diverse agricultural products across Sub-Saharan Africa, resulting in the growth of imports over the past decade. These factors combine to create an exciting opportunity for U.S. agricultural exporters.

Southern Africa is typically a net importer of agricultural products. In recent years imports have been largely driven by demand for diverse food and agricultural products and the changing tastes and preferences of a more connected, global society. Increased urbanization is driving demand for convenient and ready-to-eat foods. As a result, the number of restaurants, bars, and cafes (including U.S. and local fast food chains) is growing as dining out becomes more popular throughout the region, especially in South Africa. 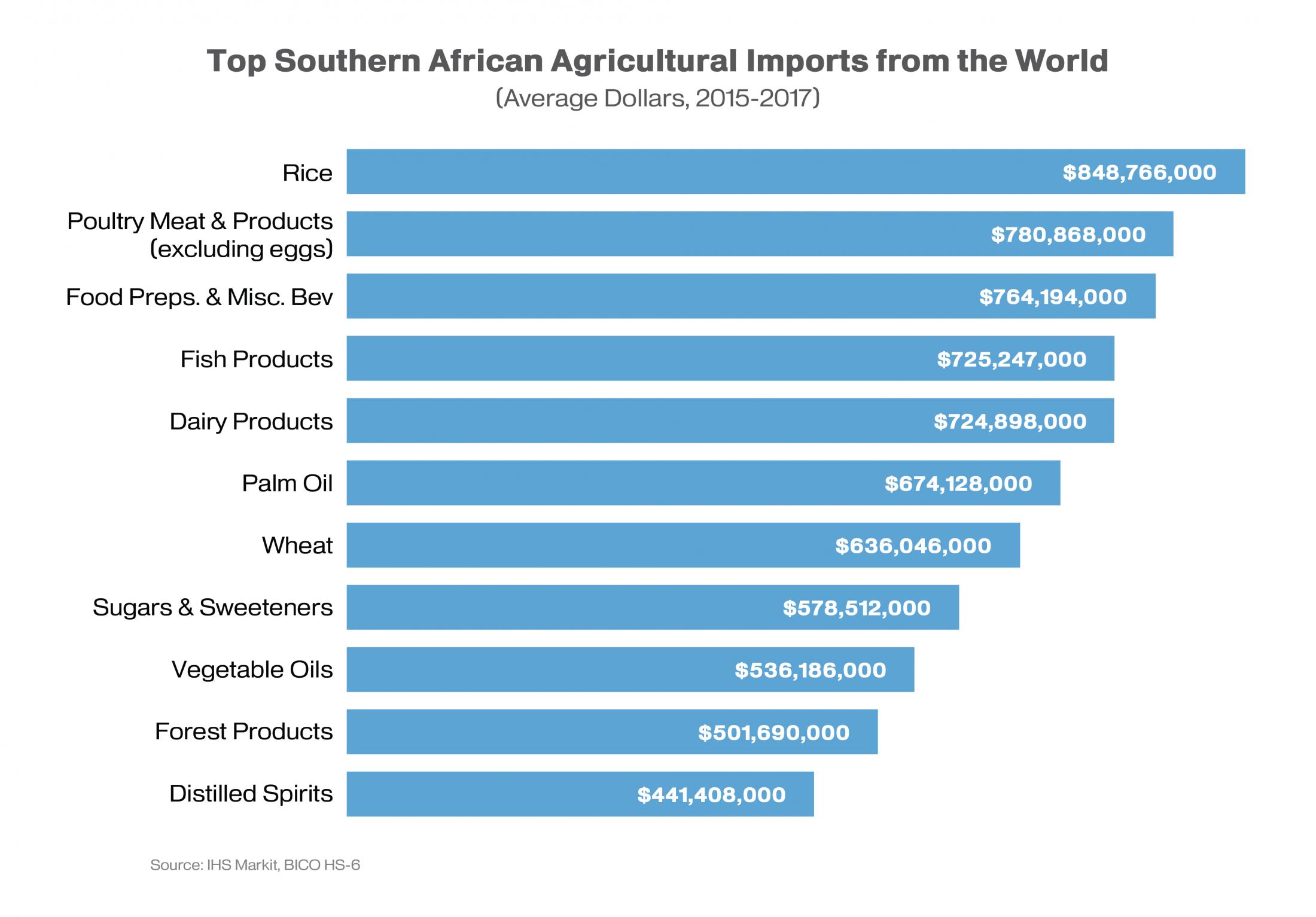 U.S. agricultural exports to Southern Africa have fluctuated over the past 10 years between $372 million and $766 million. This fluctuation is caused primarily by drought-related variations in local corn production and competition from other wheat suppliers. South Africa and Angola are the largest importers of U.S. agricultural products in the region, accounting for 90 percent of U.S.-origin imports in 2017. South Africa serves as a gateway for distribution throughout the region and U.S. products may be transshipped to neighboring countries. U.S. agricultural exports to Southern Africa totaled $627 million in 2017, accounting for only 4 percent of the region’s $14 billion in total imports.

For the last five years, poultry meat and products (excluding eggs) have topped the list of U.S. agricultural exports to Southern Africa, with sales primarily to South Africa and Angola. Exports of chicken legs to South Africa have fared well despite a quota of 65,000 tons (at the most-favored-nation tariff rate of 37 percent) and prohibitively high anti-dumping tariff rates above the quota. In May 2018, Namibia opened its market to U.S. poultry and FAS projects that Namibian broiler meat imports could increase by about 3.5 percent this year, reaching approximately 30,500 tons in 2018, driven by local demand that cannot adequately be met by local supply. Broiler meat is relatively affordable and is becoming an increasingly important protein source in the diet of many Namibians.

Another new opportunity in the region is the opening of South Africa to imports of U.S. table and hatching eggs. While South Africa was previously self-sufficient in egg production, the local egg industry is now recovering from highly pathogenic avian influenza (H5N8) outbreaks in 2017. FAS projects that South African table egg imports could reach 75 tons in 2018. There are also opportunities for hatching eggs as a result of the H5N8 outbreaks. However, South African government officials have informed FAS that the opening of the hatching egg market will likely be a temporary concession.

As noted earlier, the demand for U.S. corn and wheat is highly dependent on domestic supplies and global prices. The 2016/2017 marketing year saw U.S. wheat at highly competitive prices due to problems with the European crop, but recently wheat from countries in the Black Sea region has proven very competitive. Strong U.S. corn exports in 2016 and 2017 were a result of drought conditions in the Sub-Saharan Africa region and demand for U.S. corn is expected to revert to pre-2016 levels as domestic yields rebound. While U.S. exports of planting seeds, tree nuts, prepared foods, forest products, and feeds and fodder have remained steady over the last five years, there is ample opportunity to capture market share from international competitors.

Across the Southern Africa region, there has recently been strong growth in imports of liquor (whiskey and bourbon), animal feed, plant and animal genetics, and consumer-oriented products. American whiskey sales to South Africa grew 17 percent from 2016 to 2017, reaching more than $10.5 million. Additionally, a decline in South Africa’s wine production and stocks may translate to new opportunities for U.S. wines despite a 25-percent import tariff.  Similarly, U.S. apples from areas free of apple maggot (Rhagoletis pomonella), may see new opportunities in South Africa due to the severe drought in the Western Cape in 2017/2018, which will likely adversely impact domestic production.

With lifestyles and tastes around the world changing at an amazing speed, opportunities abound for expansion of U.S. agricultural products into emerging markets like those in Southern Africa. U.S. exporters offer high quality and variety and FAS is poised to assist with growing these markets and expanding the reach of U.S. agriculture.

Lentil Export Opportunities on the Rebound

Global lentil exports in 2020 jumped from $1 billion to $2.6 billion compared to the year before. Canada and Australia led the surge, accounting for more than three-fourths of the exports. Lentil exports peaked at $2.7 billion in 2015 but drifted lower through 2019, primarily due to reduced shipments from Canada to India and Turkey and from the United States to Canada and India.
International Agricultural Trade Report

The Republic of Korea (Korea) is a developed Asian country with a global presence in high-tech, automobile, and electronics industries. Korea is an industrial powerhouse with a skilled labor force.
International Agricultural Trade Report

Global prices for wheat and rice have risen during the past year due to lower production, export restrictions among major suppliers, and strong foreign demand.