Lentil Export Opportunities on the Rebound

Global lentil exports in 2020 jumped from $1 billion to $2.6 billion compared to the year before. Canada and Australia led the surge, accounting for more than three-fourths of the exports. Lentil exports peaked at $2.7 billion in 2015 but drifted lower through 2019, primarily due to reduced shipments from Canada to India and Turkey and from the United States to Canada and India. Exports between January and April 2021 have fallen $84 million from the same period last year to total just more than $700 million. However, like in the latter half of 2020, reduced tariffs in India are expected to support higher exports during the remaining months of 2021.

Lentil production in the United States grew 50 percent during the last 10 years, increasing from 240,000 tons in 2011 to 376,000 tons in 2020. Production fluctuated with a low of 175,000 tons in 2014 and a high of 650,000 tons in 2016, as farmers meet growing demand by continuing to increase the area planted. The United States has averaged 5 percent of global production during the past 10 years. Lentils in 2020 were grown primarily in Montana (72 percent), North Dakota (15 percent), Washington (8 percent), and Idaho (5 percent). Production in 2021 is expected to be down due to unfavorable drought conditions in Montana, where more than 70 percent of the crop was rated poor or very poor and less than half the crop was harvested in early August. 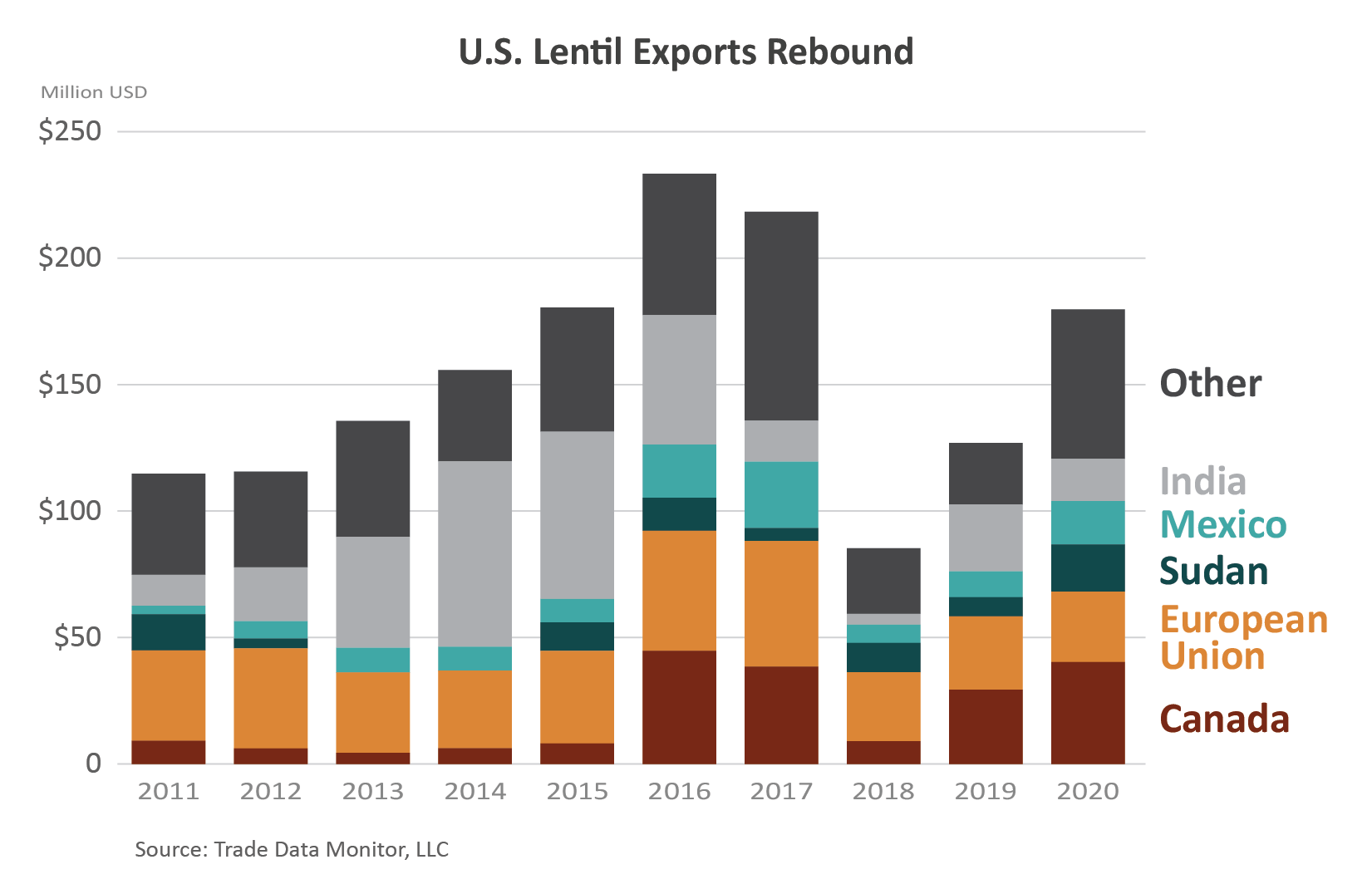 During the last 10 years, U.S. lentil exports have grown from $115 million in 2011 to $179 million in 2020. Exports peaked in 2016 as exports to Canada, the European Union (EU), and Mexico grew. Meanwhile, exports to India remained high before dropping off in 2017 due to a decline in U.S. production. The top 5 U.S. export markets included Canada, the EU, India, Mexico, and Sudan, which all accounted for two-thirds of U.S. exports. As the largest market at $40 million, Canada was at more than 70 percent market share. The EU was the second largest at $28 million, with nearly 20 percent market share in the EU, where top suppliers include Canada and Turkey. Exports were up for 19 of the top 20 markets but down for India, the third largest market. Year-to-date exports through June are 5 percent higher than the same period in 2020 as exports to Canada more than offset lower exports to the EU.

The global lentil trade is heavily influenced by public policy and supply and demand conditions in India, the world’s largest market. From 2015 to 2017, poor weather conditions led India to import more lentils. Recently, favorable weather conditions have increased domestic supplies in India, prompting the government to restrict imports. As a plant protein consuming country, India will always have a requirement for lentils, but the demand for it may not always be met by local production. Production for 2020 is estimated at 1.1 million tons but remains below the 2018 record harvest of 1.62 million. Production is estimated up 15 percent in 2021. Consumption during the last 10 years averages about 50 percent more than production. 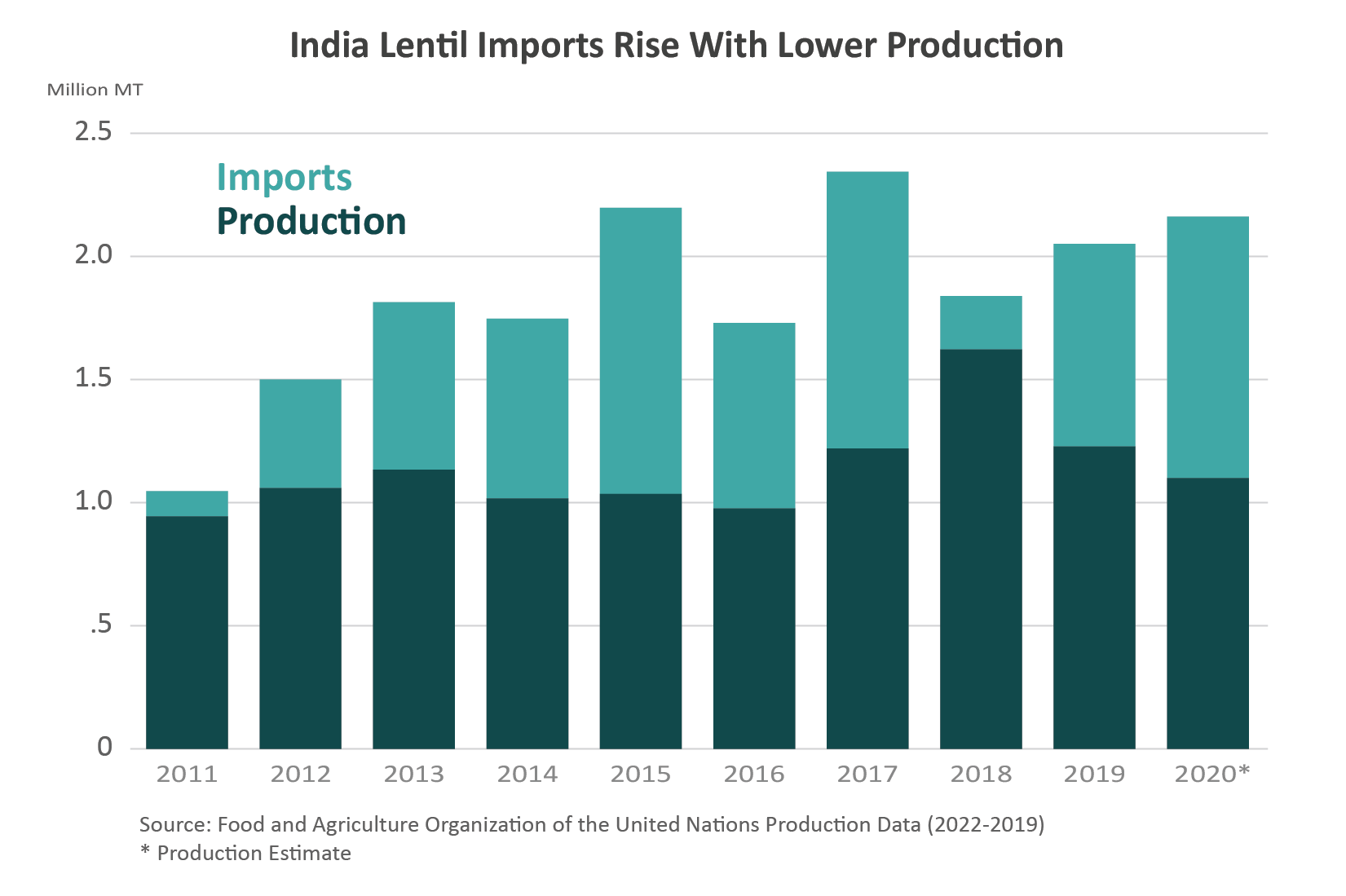 India uses of a variety of agricultural trade policies to manage its domestic lentil market. In addition to the domestic support policy of government procurement at minimum support prices, India has relied on stringent import restrictions to help maintain domestic prices. India’s import restrictions on lentils from countries other than the United States were temporarily reduced from early June 2020 until the end of the year and have dropped to zero as of July 27, 2021. (For more details, see India Lowers its Tariff Duty on Lentils - HS Code 07134000). U.S. tariffs are higher due to a retaliatory tariff on U.S.-origin lentils in response to 232 tariffs.

Strong demand, coinciding with the lower tariff, resulted in a major increase in imports from Canada and Australia. India’s imports jumped to $577 million, up from $346 million in 2019. Imports from the United States were down 56 percent in 2020 compared to 2019, as tariffs for U.S. lentils were only reduced to 30 percent versus 10 percent for Canada and Australia. Canada was the primary supplier to India accounting for more than 80 percent, followed by Australia at nearly 12 percent and the United States at 2 percent in 2020. Year-to-date imports through April are up more than $30 million with higher imports from Australia, Canada, and the United States. 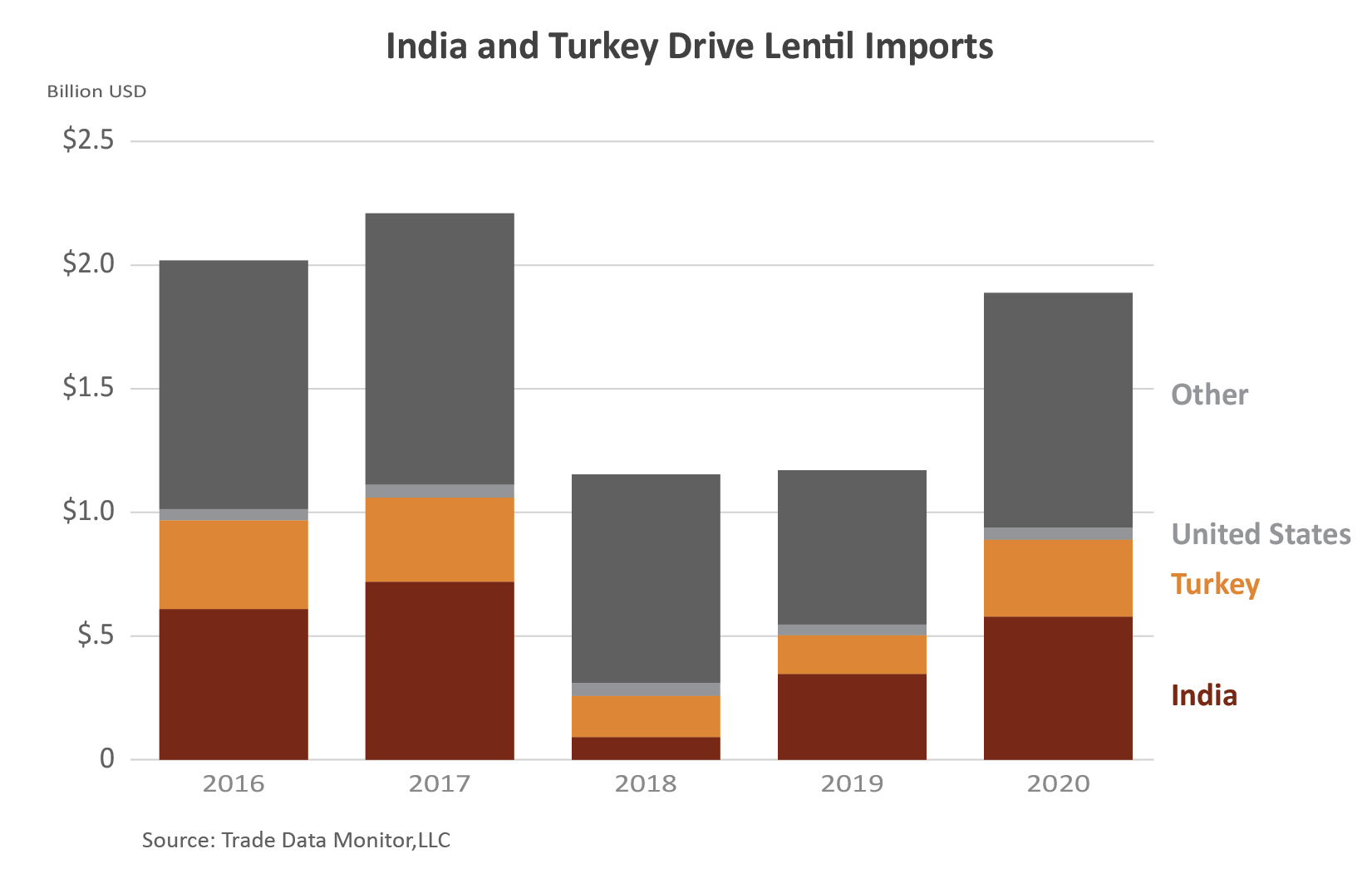 Canada is also the largest exporter, accounting for more than 60 percent of global exports with a total of $2.6 million exported in 2020. Top Canadian export markets include India, the EU, and Turkey. Canada accounts for 80 percent of the exports to India, which is the largest lentil market. In 2018, favorable weather conditions increased domestic supplies in India, prompting the government to restrict imports during 2018 and 2019. Restrictions were reduced for part of 2020, when tariffs for Canada and Australia dropped from 30 percent to 10 percent and have dropped to zero for part of 2021. (For more details, see India Lowers its Tariff Duty on Lentils - HS Code 07134000). 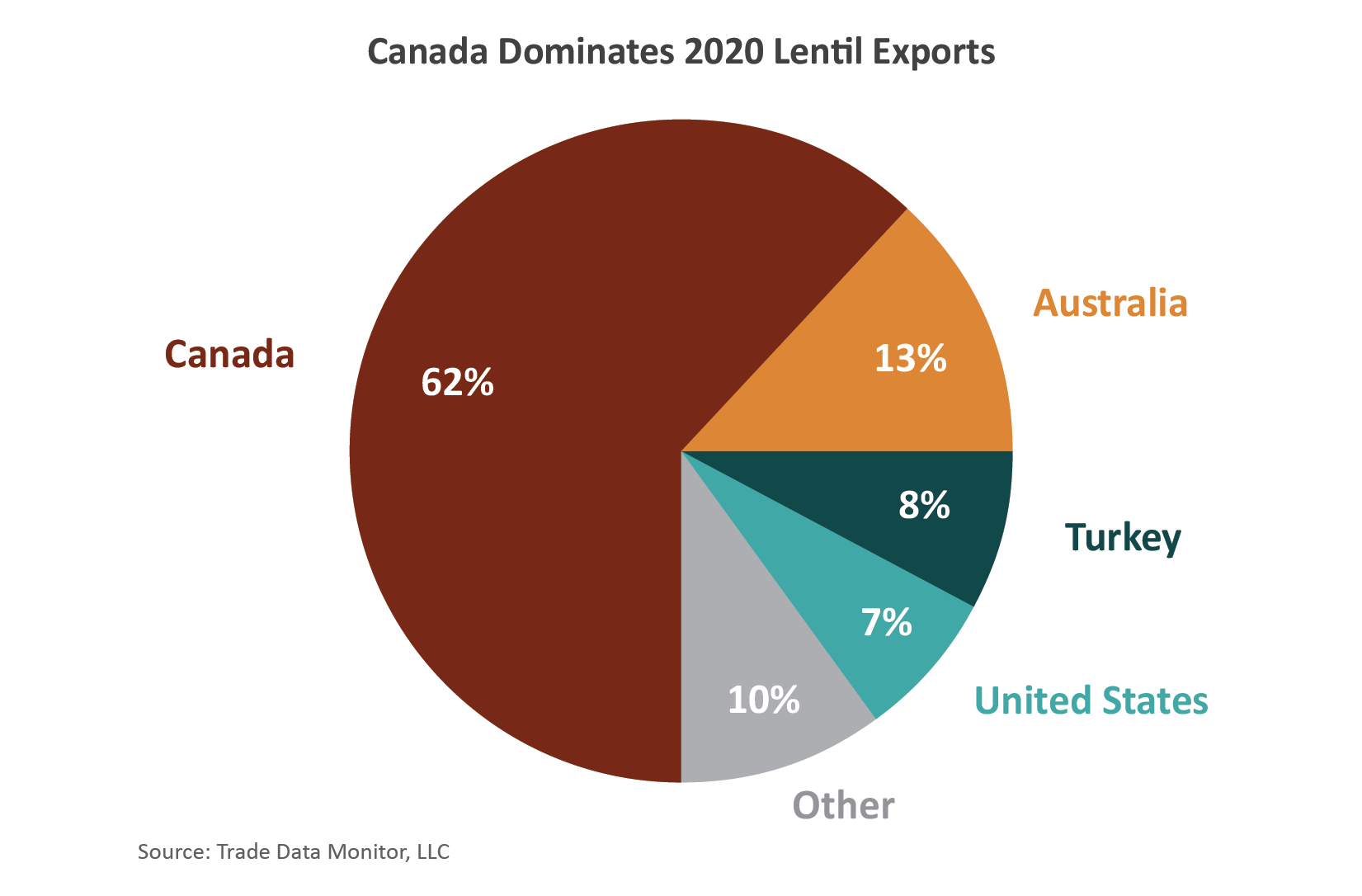 India’s reduced tariffs in 2020 led to higher imports from Canada (up nearly 60 percent) and Australia (up more than 70 percent). Turkey is the second largest importer with Canada the top supplier at more than 80 percent. Year-to-date exports through June are 40 percent lower as exports to nearly every export market are down. It is estimated that the duty reduction in India will support higher imports during the remaining months of 2021, provided supplies are available.

Production more than doubled from 2011 to 790,000 tons in 2020 while exports rose 90 percent to $350 million to meet export demand. Australia is the second largest exporter with more than 13 percent of 2020 global exports. Exports to Bangladesh (39 percent), India (23 percent), and Sri Lanka (17 percent) account for more than three-quarters of the trade. Australia holds a market share of more than 50 percent in Bangladesh, where exports have grown from $25 million in 2011 to more than 134 million in 2020. Year-to-date exports through June are more than 30 percent higher as exports to markets such as Egypt and Sri Lanka more than offset lower exports to India.