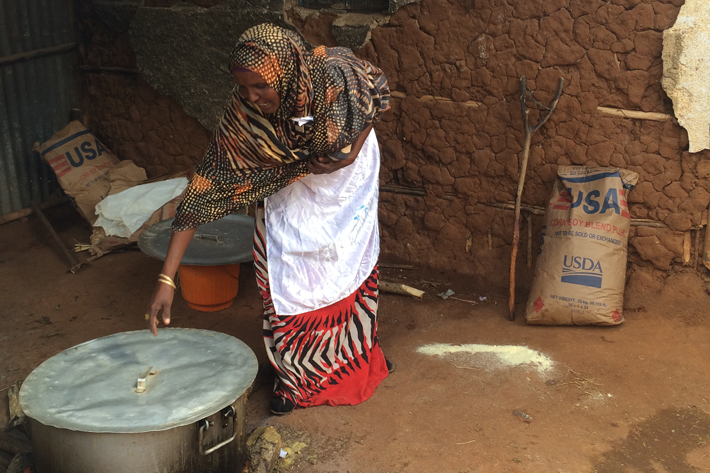 With Ethiopia facing its most devastating drought in decades, a school feeding project supported by the McGovern-Dole International Food for Education and Child Nutrition Program is providing sustenance to vulnerable children and families in some of the country’s hardest-hit areas.

USDA’s Foreign Agricultural Service (FAS) and the United Nations World Food Program (WFP) are partnering to provide meals to 263,000 children in the Afar and Somali regions of eastern Ethiopia. As the only international donors offering school feeding in those areas, FAS and WFP are currently serving an estimated 20 percent of all Afar and Somali schoolchildren.

Each morning, students at 590 schools are served a nutritious, fortified porridge of corn-soy blend. Since girls are less likely to attend school than their male counterparts, female students with an 80-percent attendance rate also get a liter of vegetable oil to take home to their families each month. For the 2015-2016 school year, FAS and WFP are providing 4,900 metric tons of corn-soy blend and 1,020 metric tons of vegetable oil to feed students at the target schools.

In addition to feeding students, FAS and WFP are supplying educational materials and training for teachers and school administrators as well as improving the physical learning environment by building and repairing school facilities and increasing access to clean water and sanitation services.

Even before drought struck, the school feeding project had already helped to boost school attendance in eastern Ethiopia. According to WFP estimates, since 2010, student enrollment has increased from 64 percent to almost 100 percent in Somali, and from 35 percent to 60 percent in Afar.

Data from the Ethiopian government indicate that the McGovern-Dole project is playing a limited, but important, role in helping mitigate the number of dropouts at schools in woredas (local districts) most affected by the drought.