In the first quarter of 2021, U.S. soybean exports reached the second-highest value ever at $7.7 billion, nearly double the same period last year. This growth was driven by record first quarter export volumes coupled with high prices, which have been climbing steadily during the past year. Export volumes are up substantially due to the rebound of trade with China owing to the removal of retaliatory tariffs, the rebuilding of the swine herd from African swine fever (ASF), and a delayed South American harvest extending the U.S. selling window. Export values were further supported by U.S. soybean prices increasing to 7-year highs on strong China purchases, high corn prices, and tight supplies in the United States and South America.

Building off record first quarter export volumes, 2021 is poised to be an excellent year for U.S. soybeans. Aided by sustained high prices and growing trade with major markets outside of China, such as Egypt and Mexico, export values are likely to remain strong throughout the year. However, facing expanding domestic crush, smaller carryin, high prices, and a record crop in Brazil, U.S. soybean export tonnage is unlikely to match last year’s record. With sustained high prices and growing global consumption, 2021 is likely to be another strong year for U.S. soybean exports. 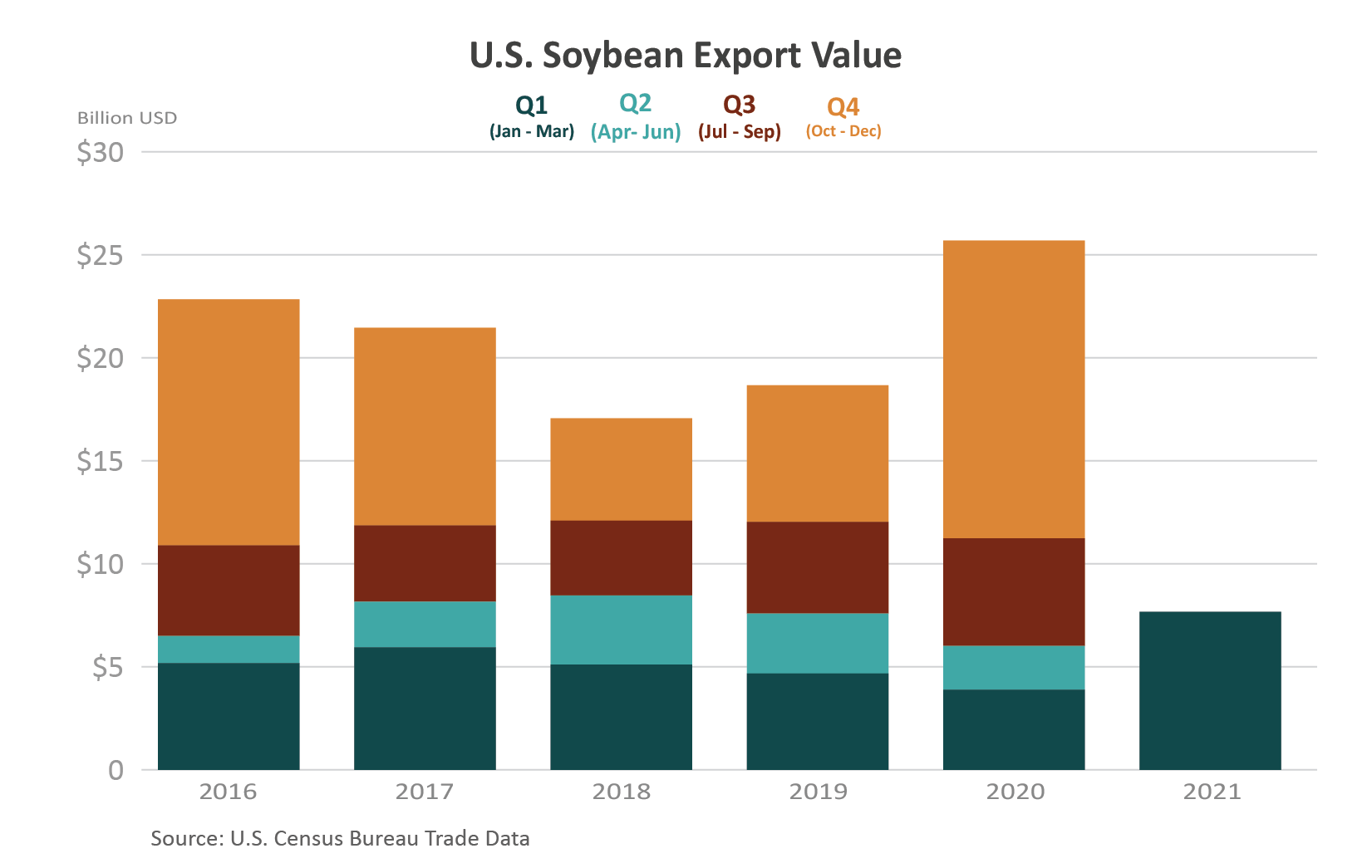 Soybean exports in the first quarter of 2020 were less than $4 billion dollars for the first time since 2007, because of weak exports to China. Starting in January 2018, exports to China plunged primarily due to Chinese tariffs imposed on U.S. soybeans during the trade dispute between the two countries. The impact was so substantial that the U.S. market share of Chinese soybean imports fell below 20 percent in 2018, compared to the previous 3-year average of 37 percent. The shrinking Chinese market for U.S. soybeans was further exacerbated by ASF infecting and reducing the pig herd in 2018 and 2019. As a result, the United States became a smaller portion of a contracting market, and U.S. soybean exports to China remained depressed from 2018 through early 2020. China hog inventories began rebounding in late 2019, but the harvest of a then-record Brazil soybean crop, lingering tariffs on U.S. soybeans, and a weak real relative to the U.S. dollar constrained U.S. shipments to the booming Chinese market. The culmination of all these factors led to the weakest first quarter for U.S. soybeans in more than a decade. 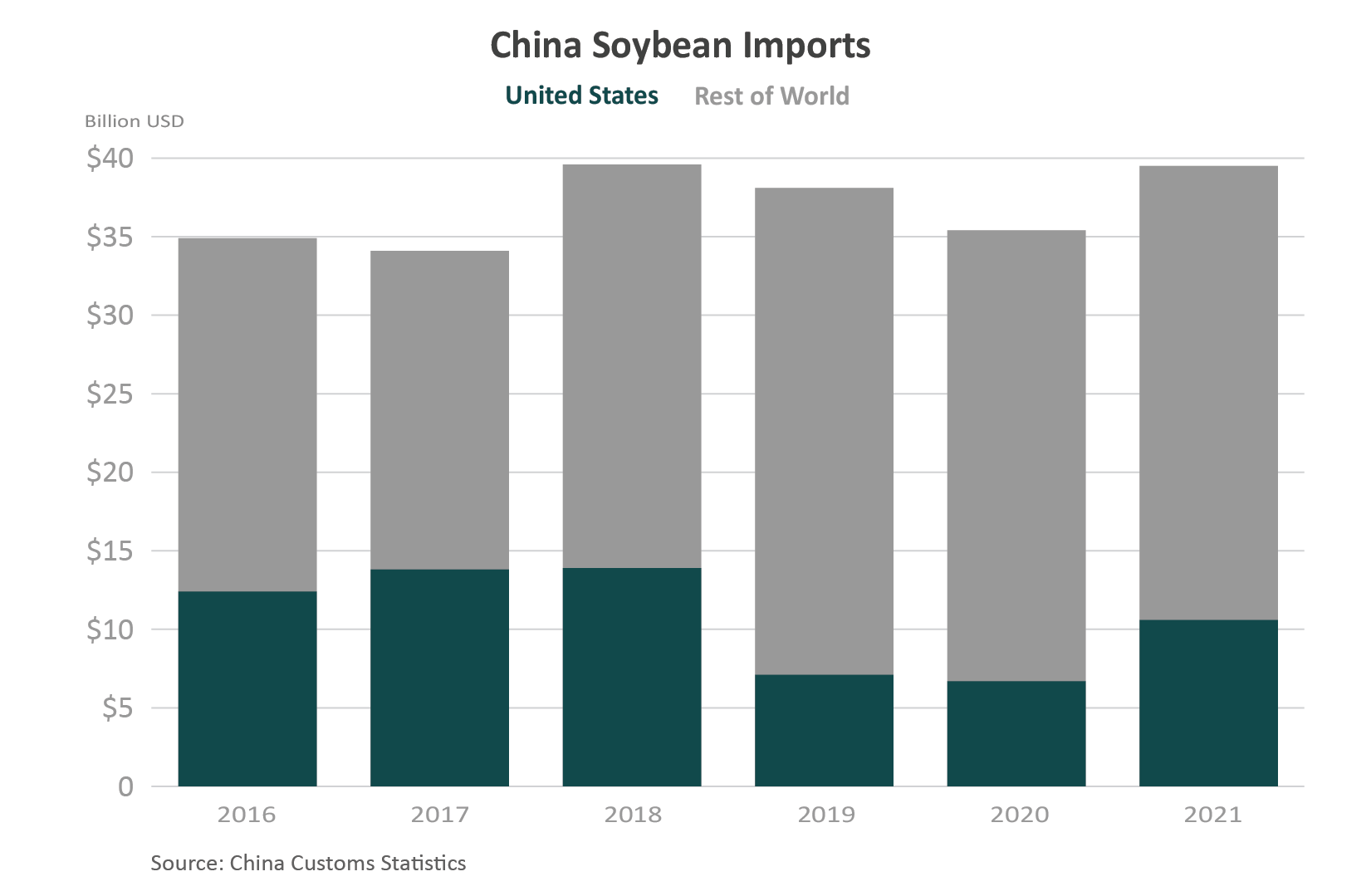 The major growth driver in the second half of 2020 and the first quarter of 2021 for U.S. soybeans has been the reemergence of China imports. Expanding swine inventory in China increased feed demand. In addition, a higher proportion of corn and soybean meal was used in the feed mixture to avoid further ASF outbreaks through the consumption of infected pig swill. China had more pigs to feed and soybean meal became a larger percentage of their diets, resulting in double-digit year-over-year China soybean import growth in 2020. 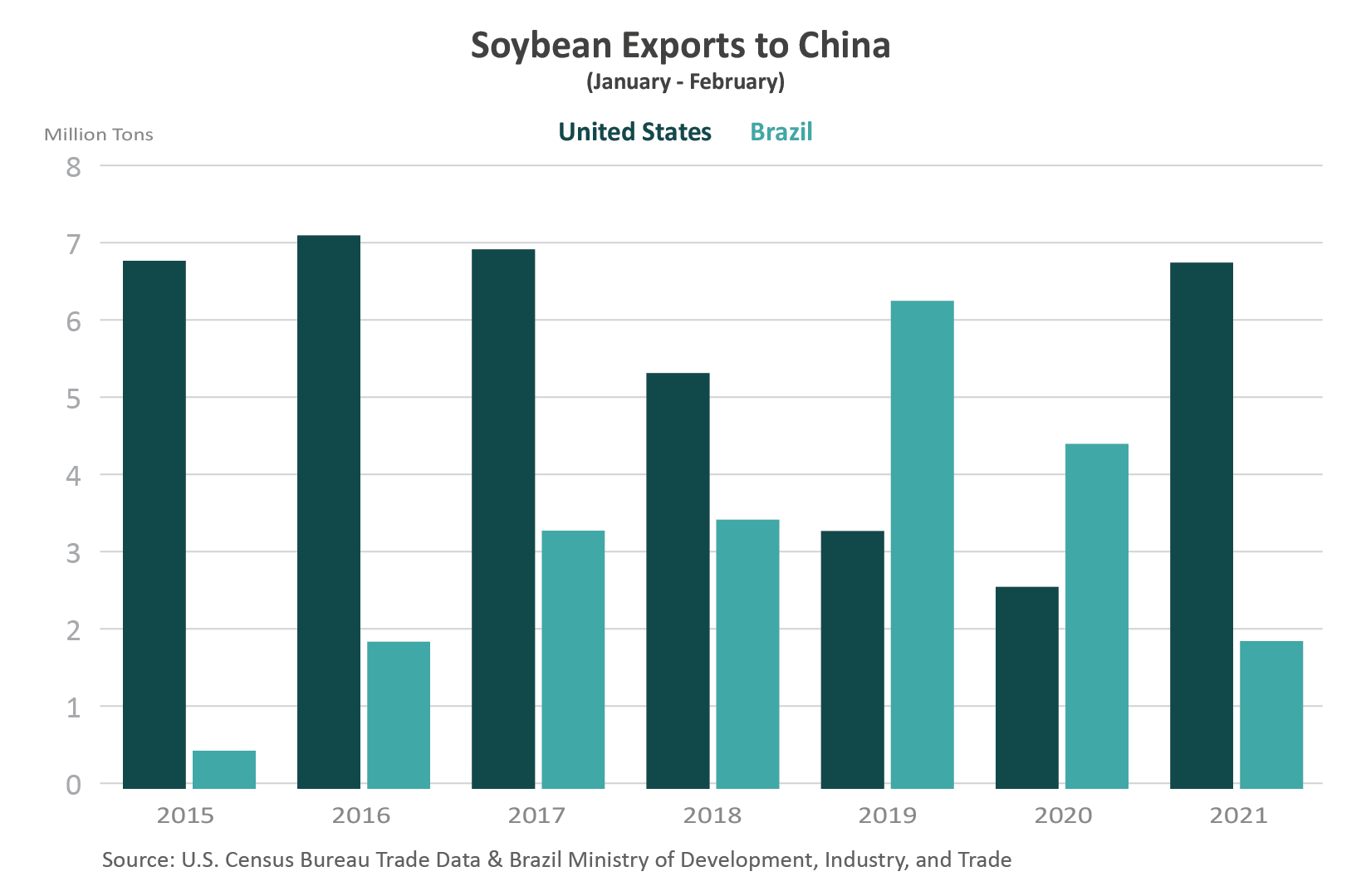 Strong U.S. exports have carried over to 2021 and have been supported by a delayed harvest in Brazil. Typically, global soybean trade transitions from the United States to South America during the first months of a new calendar year, which is evident by China soybean imports in January and Febuary during the past few years. However, dry weather in late 2020 delayed planting and heavy rainfall in early 2021 delayed harvesting, forcing China to continue buying U.S. soybeans in January. Brazil exports exploded to a record in March, pushing shipments ahead of the previous year’s pace, but this delay extended the sale of U.S. soybeans by a few weeks supporting strong export growth in the first quarter of 2021.

Part of the steady price growth has been China’s faster-than-expected recovery from ASF and subsequent growth in soybean imports. China bought the majority of the 2019/20 Brazilian soybean crop, forcing ending stocks (January 31, 2021 basis) below 2 million tons for the first time in nearly 20 years. Tight supplies have driven global prices upward and put immense pressure on the upcoming 2020/21 U.S. harvest.

U.S. corn price spikes since August of 2020 have also fueled growth in soybean prices. Since soybeans and corn compete for acreage in the United States, price movements of either commodity will influence the other. Like soybeans, China imports of U.S. corn have exploded during the past year as China tried to cool down its domestic corn prices.

Tight stocks are also driving prices higher. In 2 years, U.S. soybean stocks fell from record highs to expected near-record lows. Reduced China purchases during the ASF outbreak and the trade dispute led to record ending stocks in 2018/19. However, the resurgence of China demand and the South American harvest delays, coupled with relatively tepid production in 2019/20, are forecast to pressure U.S. soybean stocks to 7-year lows by the end of the current marketing year. Even with a forecasted 120-million-ton U.S. crop in 2021, stocks will likely remain tight and prices should remain elevated. 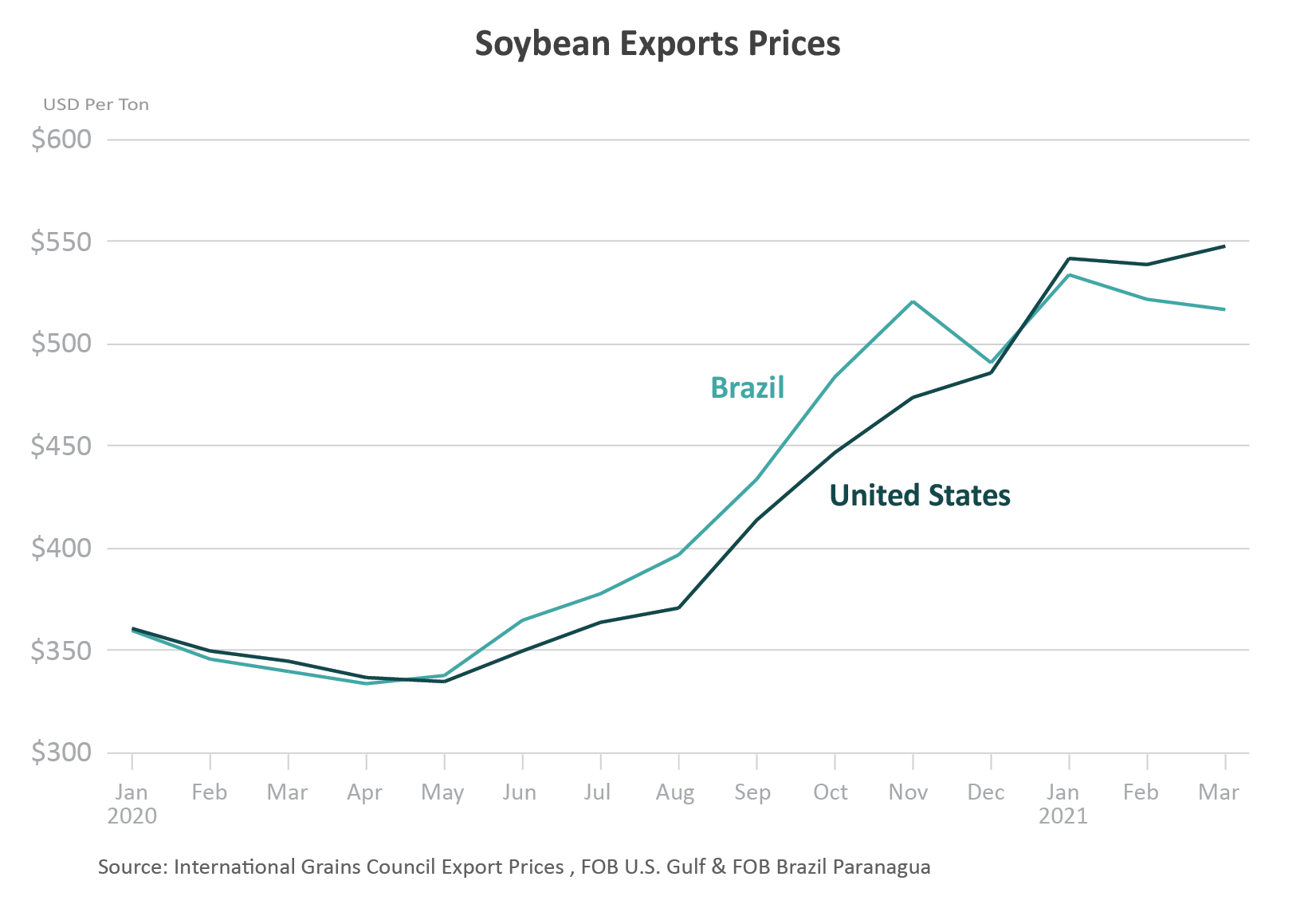 Tailwinds and Headwinds for 2021 Soybean Exports

The United States has experienced growth in markets outside of China since the beginning of the trade dispute. Some growth was temporary, such as exports to the European Union, Argentina, and Southeast Asia, where U.S. exporters experienced a 1-year spike from displaced China purchases in 2018. The temporary gains in these markets were due to the combination of tighter Brazilian supplies from increased China purchase volumes, drought in Argentina, and decade-low price discounts for U.S. soybeans relative to Brazil and Argentina. However, other major U.S. markets like Egypt and Mexico saw significant growth in 2018 that did not shrink in subsequent years. Between 2017 and 2020, the United States broadened annual exports of soybeans to these two markets by a combined 4 million tons. Led by Egypt, North Africa is expected to continue to be a growth region for soybean exports as investments in crushing facilities have shifted import demand from soybean meal to soybeans. 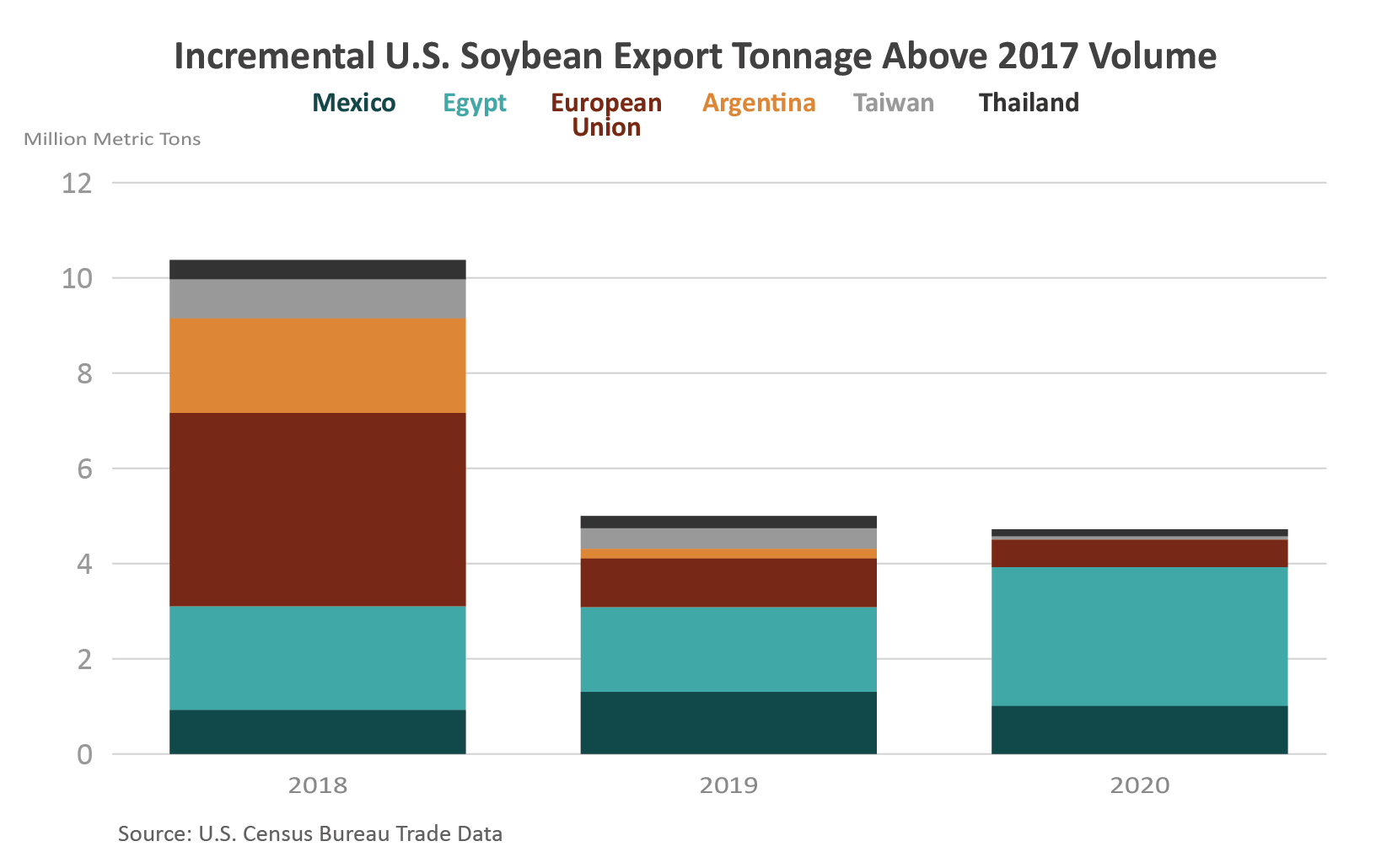 On the domestic side, short supplies and higher crush demand will limit U.S. soybean export volumes in the second half of the year, when about two-thirds of U.S. soybeans are shipped. For one, U.S. soybean carryin for 2021/22 is forecast to be 11 million tons less than the previous year. Additionally, increased U.S. renewable diesel capacity has buoyed both crush and soybean oil demand. Higher domestic crush demand will both reduce the amount of soybeans available for export and support U.S. soybean prices. Smaller soybean supplies, increased domestic demand, and higher prices will drive down the U.S. share of global exports.

In addition to domestic challenges, the United States will face headwinds in foreign markets, including China. During the past year, China has purchased U.S. and Brazilian soybeans at a record pace, building record stockpiles. However, slower China soybean crush and growing stocks raise the question how much longer China will continue purchasing at current volumes. With China accounting for about 60 percent of global soybean imports, a change in purchases can drastically shift the market. Any number of wild cards like a resurgence of ASF in China, a reduction in soybean meal in feed formulations, declines in pork prices, or China’s utilization of record reserves could weaken Chinese imports. Additionally, the United States will face more competition from Brazil this year. The 2020/21 Brazil crop is forecast at a record, driven by both record yields and area harvested. With a 6-percent jump in Brazil soybean production, there will be less pressure on the 2021/22 U.S. crop to meet growing global demand.

With expected higher prices but lower volumes, it is unclear whether 2021 can overtake last year’s record export value. Regardless, 2021 is shaping up to be another strong year for U.S. soybean exports.