In 2020, the value of U.S. wheat exports to the world reached $6.3 billion, up 1 percent from 2019 due to increased demand from China. The top three markets, accounting for 36 percent of sales, were the Philippines at $826 million, Mexico at $778 million, and Japan at $635 million. Increased demand from China offset stronger competition from Russia and Canada in key markets including Nigeria. 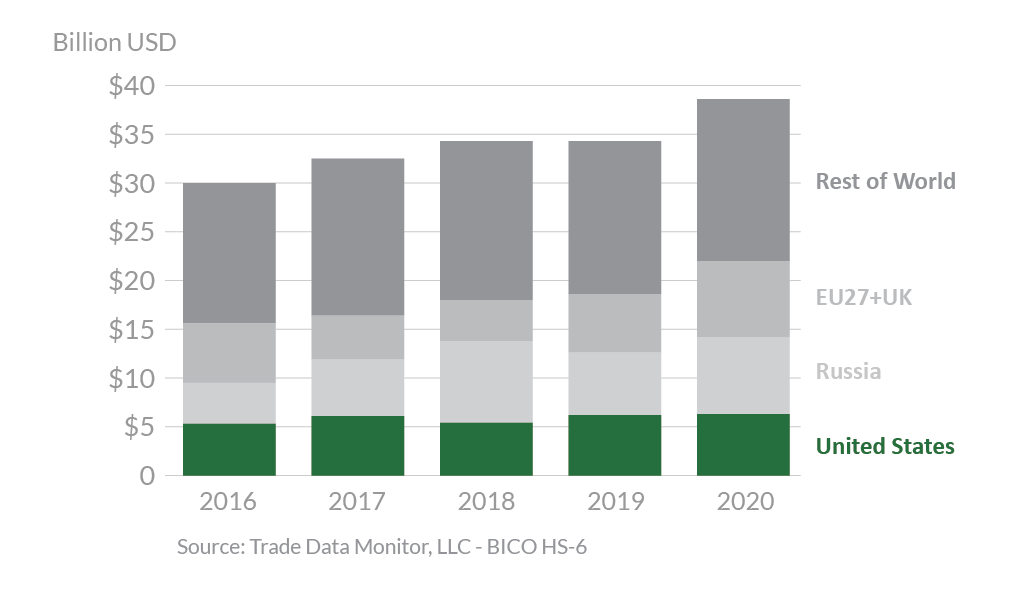 Global trade in wheat is expected to grow in years to come, with major competitors to the United States being Russia, Canada, Australia, Ukraine, and the European Union. The United States is likely to continue as a major supplier of wheat to much of Latin America and East & Southeast Asia, with Mexico, the Philippines, and Japan expected to be strong, reliable markets for U.S. wheat.

U.S. competitiveness in core markets during 2021 is likely to remain strong based on continued demand from China and export restrictions in Russia. The Russian government will implement an indefinite floating export tax on wheat that may limit the country’s production and exports. This could offer an opportunity for U.S. wheat to expand its exports to markets where Russia has maintained a price advantage. However, the European Union is expected to have abundant exportable supplies amid a larger crop. Considering this competition, U.S. exports to Africa and the Middle East may face challenges in 2021. China is expected to have strong demand for imported wheat in 2021, and the United States will likely continue expanding exports there. Brazil’s 750,000-ton TRQ was recently extended for another year, offering additional export opportunities for U.S. wheat in South America.