In 2020, U.S. ethanol exports totaled 1.3 billion gallons valued at $2.3 billion. This volume was 9 percent lower than 2019 due to reduced demand for fuel use, and 20 percent below the record 1.7 billion gallons shipped in 2018. Year-over-year value fell only 1 percent due to higher prices for fuel ethanol and increased shipments of higher-value, medical-grade ethanol. 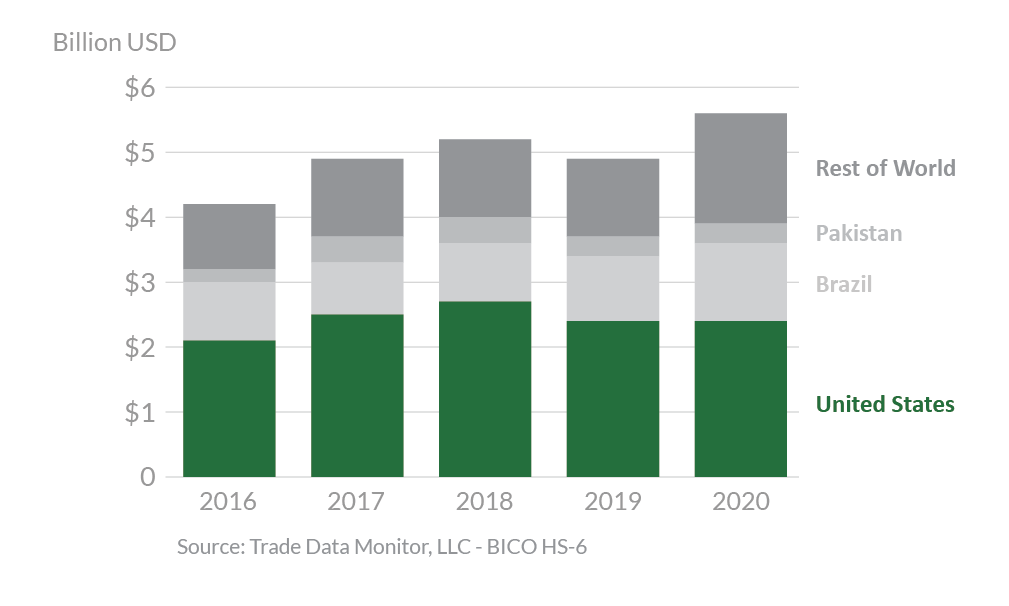 As the spread of COVID-19 slows and vaccines are distributed in 2021, global demand for gasoline and ethanol will start recovering. Beyond 2021, with the world emerging from the pandemic, gasoline and ethanol markets will further recover, although the pace and degree will vary by country.

Pre-pandemic, the United States supplied half of the world’s ethanol exports, but its market share dropped to an estimated 43 percent in 2020 as fuel demand collapsed and some countries (notably China and Brazil) captured more of the trade in medical-grade product. Markets should mostly rebalance in the coming 1-2 years, permitting U.S. market share to rise as the pandemic recedes and fuel ethanol reasserts its dominance in trade.

Demand for mobility grows as population and incomes grow, but ethanol-blended gasoline is only one of several means to meeting increased demand for mobility while lowering greenhouse gas emissions. Increased mass transit, improved fuel efficiency, lifestyle changes including telework, and alternative drive trains like electric motors are all factors affecting transport demand, with which ethanol must compete. Antidumping and countervailing duties placed by China, Brazil, the EU27+UK, and others, and licensing restrictions or import bans imposed by Argentina, Thailand, India, and the Philippines, all limit (or threaten to limit) the United States’ ability to export fuel ethanol, while markets for ethanol used as an industrial chemical and in consumer products are relatively barrier-free.