Opportunities for U.S. Snacks & Sweets in the GCC Region

The Gulf Cooperation Council (GCC) is a regional political and economic treaty organization comprised of the Arabian Gulf nations of Bahrain, Kuwait, Oman, Qatar, Saudi Arabia, and the United Arab Emirates (UAE). It is the world’s largest oil- and gas-producing region, enjoys the highest standard of living in the Middle East, and is relatively stable and wealthy.

The GCC countries are geographically small, but linguistically and ethnically diverse, and are home to more than 57 million people and large expatriate populations. The region’s historic nexus as a trade hub between India and Europe has always made it a melting pot for people, food, and cuisine. Historic acceptance of foreign cuisine has led to the quick adoption of Western diets and continues to provide significant opportunities for U.S. food brands.

Per-capita income in the GCC countries has been rising at an estimated 1.1 percent compound average growth rate (CAGR) per year since 2015, reaching an average $56,595 in 2019. This  is substantially higher than the overall average for the world’s advanced economies and thus stimulates higher demand for imported and high-value processed products such as snacks and confectionery products. The region’s limited arable land and scarce water resources make it highly dependent on food imports to meet the needs of its rapidly growing population. (For information about regulatory and market access considerations, see the latest Food and Agriculture Import Regulations and Standards report published by the FAS Office of Agricultural Affairs in Dubai.)

The snacks and confectionery food segment – particularly chocolates, salty snacks, sweet biscuits, and sugar confectionery – continues to grow in tandem with the economy, rising affluence, and expanding young and migrant populations in the Gulf states. Factors such as busy lifestyles, more women in the workforce, and increasing industrialization have also amplified the demand for ready-to-eat packaged foods and snacks in the region over the last decade. Dual income professional households have also stimulated demand for snacks between meals, as a meal replacement, and as a reward after a busy work day.

According to Euromonitor sales data, the GCC region consumed $6.6 billion worth of snacks and confectionery products in 2019. Total consumption has grown at a CAGR of 2.7 percent for snacks and 2.3 percent for confectionery since 2015, driven by population growth, influx of tourists, and high per-capita gross domestic product (GDP). Euromonitor estimates that the GCC market will expand at a significant pace over the next few years, at a CAGR of 4.7 percent for snacks and 5.4 percent for confectionary between 2020 and 2024. At this pace, the market is expected to reach $8.4 billion by 2024. Saudi Arabia and the UAE, with their large and affluent populations, account for more than 75 percent of snacks and sweets consumption by value. On the other hand, smaller countries like Qatar and Bahrain are experiencing robust growth and are expected to become larger markets by 2025.

Retail Sales of Snacks & Confectionery in the GCC Region by Country

Consumer purchasing preferences in confectionery and snacks are similar among the Gulf States. However, sales data indicate that Saudi Arabian consumers favor savory snacks, followed by chocolate and fruit snacks. In Oman, the sales figures point to a fondness for salty snacks, while in Qatar, the preference is for savory snacks as well as sweet biscuits. In the region overall, chocolate confectionery comprises 31.3 percent of all snacks and confectionery products consumed in the GCC region, by value, followed by salty snacks at 21.2 percent, and sweet biscuits at 13.5 percent. The region has a large population of young people who are shifting consumption patterns, leading to the expectation that demand for savory snacks will increase in the coming years. The consumption of snack bars, nuts, seeds, trail mixes, and sugar confectionery grew at a quicker pace compared to other segments, translating into an increased share of total snacks and confectionery consumption.

Saudi Arabia and the UAE, with their large consumer bases, are the major snack food and confectionery importers in the region, together accounting for 75 percent of the region’s imports from the world. However, global exports of confectionery products to Oman and Qatar grew at annualized rates of 12.8 percent and 7.2 percent, respectively, between 2015 and 2019, outpacing both Saudi Arabia (6 percent) and the UAE (-2 percent). Snack food exports to the region exhibited similar trends, growing 7.3 percent to Oman and 4 percent to Kuwait over the same period while exports to the UAE fell 0.3 percent.

According to Trade Data Monitor, global exports of snacks and confectionery to the GCC region totaled $2.9 billion in 2019, a 12-percent increase from 2015. The United States faces significant competition from exporters in the European Union, Turkey, and, increasingly, local and regional processors or producers, especially from Saudi Arabia. While the United States ranks among the top four exporters of snacks and confectionaries to the GCC countries, the EU is the major supplier, holding a 39.5 percent market share, by value, in 2019. However, this represents a decline from the EU’s 44 percent market share in 2015. Other major suppliers to the region are Saudi Arabia, with a market share of 10.1 percent, followed by Turkey at 9.3 percent, and the United States at 8.2 percent. 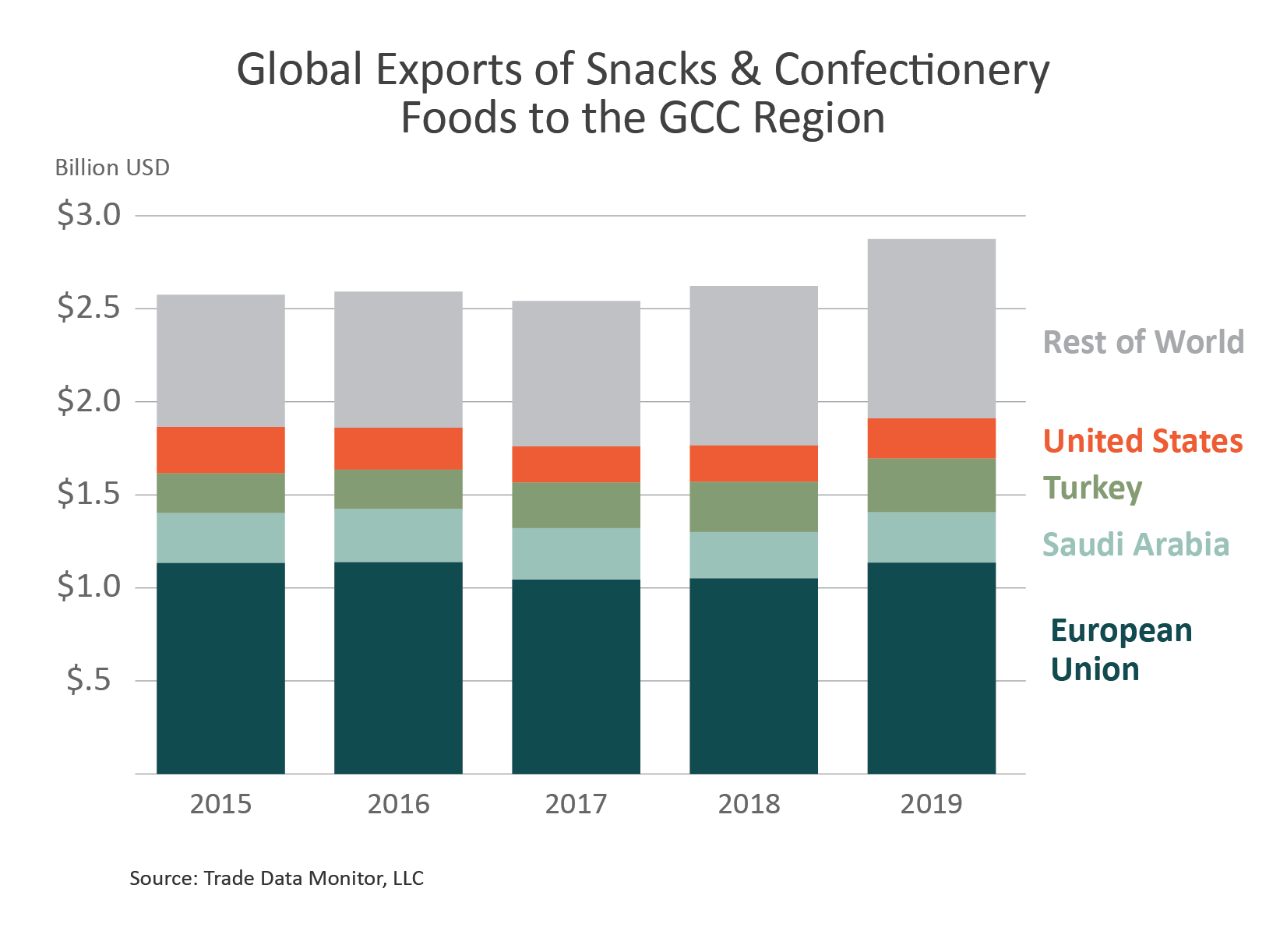 Taken as a whole, the GCC region is the fourth-largest market for U.S. snack foods and the fifth-largest market for U.S. confectionery products. In 2019, U.S. exports of snacks and confectionery to the region grew 10 percent, reaching just over $215 million. This growth is expected to continue in 2020 and beyond, due in part to the fact that many GCC consumers have lived in the United States and have a preference for U.S.-style snack foods. From January-October 2020, U.S. exports of snack foods to the GCC countries increased 12 percent over the same period in 2019. Because they are perceived as higher-quality products, U.S. foods exported to the Gulf states typically command higher prices than those from the EU and Arab countries.

The GCC country with the fastest growth in U.S. snack and confectionery sales is Qatar, where sales had a CAGR of 16.1 percent between 2015 to 2019, reaching a total of $15.2 million. The slowest-growing market is Kuwait, with a CAGR of 5.2 percent in the same period and total U.S. sales of $22 million in 2019. In Bahrain, U.S. sales increased 11 percent in the 2015-2019 time period, to reach $7.3 million, while sales to Oman grew 9.1 percent, to reach $5.2 million in 2019. U.S. snack and confectionery exports with the most growth in the GCC market over the last five years are potato chips and prepared peanuts and peanut butter, particularly to Bahrain and Saudi Arabia.

U.S. Exports of Snacks & Confectionery Foods to the GCC Region

The GCC countries are an important regional trade hub and a growing for food-related trade shows and marketing events, providing an ideal launch pad for expansion into the Middle East and North Africa. The region offers a wide array of opportunities to U.S. suppliers of snacks and confectionery due to favorable demographics, which include young and growing expatriate populations, increasing demand for new and innovative flavors, and robust economic conditions.

The advantages for U.S. exporters to the region are numerous, including consumers’ favorable views of the U.S. product -quality and the region’s high per-capita incomes. There are also consistently low tariffs and relatively transparent import procedures. Additionally, the United States has free trade agreements both Bahrain and Oman. Under the market access provisions of the U.S.-Oman agreement, almost all consumer goods and 87 percent of all agricultural tariff lines were given duty-free access. Tariffs on remaining eligible goods were phased out by 2019 by both countries.

The governments of Saudi Arabia and other GCC member states have introduced, or are considering, measures such as voluntary sugar reduction, front-of-pack-nutrition labels, and taxes on sugar-sweetened beverages to promote healthier eating. Related to these government policies, a growing number of consumers, particularly Millennials, are increasingly aware of how diet impacts health issues like obesity and diabetes. As a result, many of them are prioritizing healthier, more balanced diets. These consumers’ health-consciousness and disposable incomes mean demand for healthy snacks is soaring. Similarly, fitness-oriented consumers are opting for lower-calorie snacks as people are spending less time exercising due to COVID-19 lockdown restrictions. Further, the UAE, according to Dubai Carbon, is one of the world’s leading generators of food waste per capita, raising sustainability and food security concerns. Exporters can address these social and environmental issues by focusing on package sizing and offering compostable or recyclable packaging materials.