In 2020, Colombia was the 11th largest destination for U.S. agricultural exports, totaling $2.7 billion. This represents a 3-percent increase from 2019. The United States is Colombia’s top supplier of agricultural goods by a wide margin, representing 48 percent of the total import market. The EU27+UK is Colombia’s second-largest supplier with only 8 percent market share. The U.S.-Colombia Trade Promotion Agreement (CTPA) has expanded export opportunities for many U.S. agricultural products. The largest year-to-year export increase was seen in corn, up 28 percent to $876 million in 2020. Exports of soybean meal, soybean oil, and rice also rose last year, up $73 million, $20 million, and $16 million, respectively. Exports of pork & pork products plummeted $74 million, while soybeans and poultry dropped $32 million and $21 million, respectively. In 2020, Colombia was the fourthlargest market for U.S. corn exports, third- largest market for U.S. soybean meal, and seventh-largest market for U.S. pork. 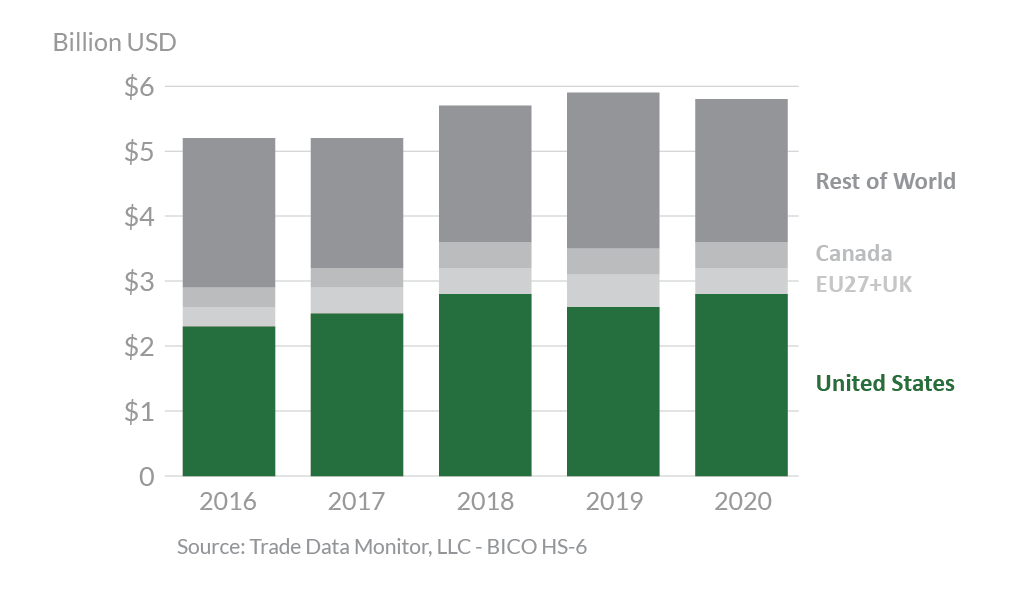 Colombia is the leading destination for U.S. agricultural exports to South America, and the United States continues to be the main supplier for most Colombian agricultural imports due to CTPA trade preferences.

In 2020, the United States faced increased competition from South American exporters likely due to the Colombia-Mercosur Economic Complementation Agreement, which removes or lowers duties on many agricultural products imported from Brazil, Argentina, Paraguay, and Uruguay. As of October 2020, tariffs on white corn and wheat from MERCOSUR countries were zero, while the tariff on yellow corn from MERCOSUR countries was 5 percent. Canadian exports, especially in wheat and legumes, remain competitive. The ColombiaCanada Free Trade Agreement entered into force a year before the 2012 CTPA, resulting in a “head-start” advantage to Canadian exporters that strengthened their trade relations with Colombian millers.

Income and population growth in Colombia are projected to continue driving increases in demand for most imported agricultural products. Most importantly, corn, soybean meal, and soybean oil imports are expected to grow over the next 10 years, and the United States is in a favorable position to meet Colombia’s needs. Although the COVID-19 pandemic has slowed economic growth and demand for imports, Colombia is expected to make a recovery. U.S. consumer-oriented food exports, such as pork, poultry, and dairy, are expected to continue rapid growth in Colombia as economic growth and middle-class expansion return after the economic impacts of the pandemic pass.