In 2020, Vietnam was the seventh-largest destination for U.S. agricultural exports, totaling $3.3 billion. This represents a 4-percent decline from 2019, and a 16-percent decline from a record-setting 2018. The United States is Vietnam’s second-largest supplier of agricultural goods, following China. Continued economic integration and FTA negotiations have allowed more openings for foreign products. The largest export growth from the United States to Vietnam in 2020 was in soybeans and wheat, up $158 million and $64 million, respectively. Exports of distillers’ grains, tree nuts, and dairy products also increased, by $28 million, $18 million, and $15 million, respectively. Exports of cotton were down by more than $260 million. For the first time since 2014, Vietnam was not the top destination for U.S. cotton, surpassed handily by China. Exports of soybean meal plummeted by $119 million in 2020, while prepared food shipments fell $31 million after swelling to a record high of $117 million in 2019. 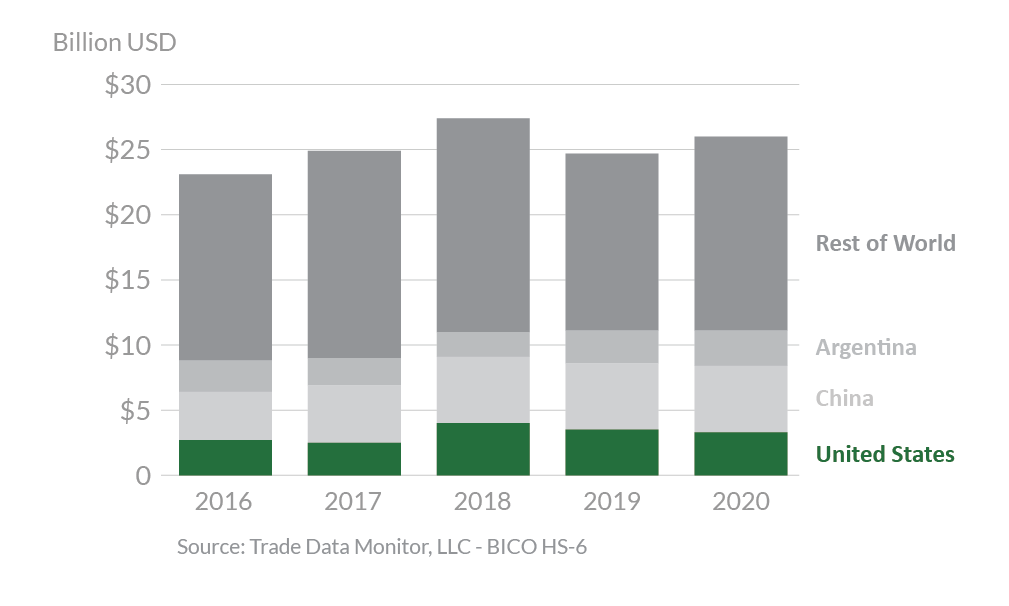 Despite COVID-19, Vietnam had economic growth of 2.9 percent in 2020. With a young, highly educated population and significant foreign direct investment, Vietnam is expected to recover quickly from the current global economic downturn. Relatively high tariffs and strong competition from countries benefitting from preferential trade agreements with Vietnam will constitute the most significant challenges to a diverse range of U.S. food and agricultural exports. Vietnam entered into numerous free trade agreements (FTAs) with third countries, including the Comprehensive and Progressive Agreement for Trans-Pacific Partnership, the European Union-Vietnam FTA, and the Regional Comprehensive Economic Partnership. Currently, the United States is subject to high most-favored-nation tariffs, while competitors from other markets, including China, Australia, Canada, New Zealand, and the European Union, gain greater market share as tariffs decline under their FTAs.

As a result of significant engagement, many agricultural trade irritants with the United States have been eliminated. Vietnam improved its meat and poultry facility registration process and restarted its approval process for biotechnology products. Vietnam also granted market access for U.S. sorghum, oranges, and blueberries. The United States continues to work on market access for U.S. grapefruit, lemons, mandarin, and stone fruit.