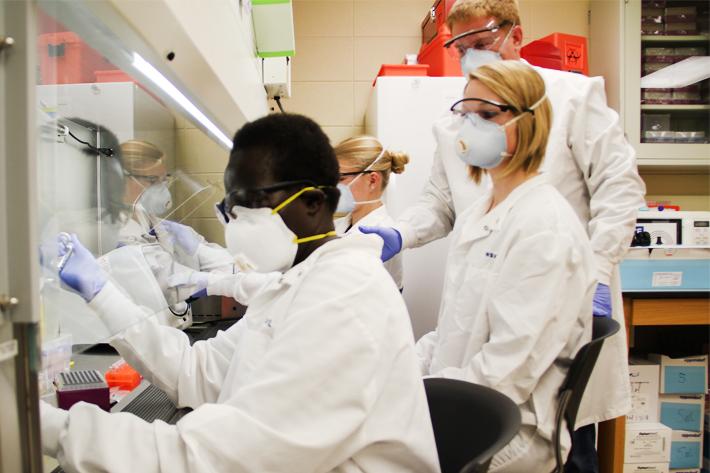 Borlaug fellow Stella Atim of Uganda (left) studies tissue samples in the lab at the University of Wyoming.

Research has shown that female students are less than half as likely to graduate with a degree in a science-related field as their male counterparts. To increase awareness and help reverse this trend, countries around the world will observe the United Nation’s International Day of Women and Girls in Science on February 11. The goals of this effort are to recognize women scientists, to inspire more women and girls to pursue careers in science, and to one day attain equal access and gender equality in science.

Through the Borlaug Fellowship Program, USDA’s Foreign Agricultural Service (FAS) invests in the future of developing countries by enabling their scientists to train with mentors from U.S. research institutions. Last year, women scientists received more than half of the Borlaug fellowships awarded by FAS. A total of 25 female Borlaug fellows, from countries across Africa, Asia and Latin America, worked with U.S. universities and USDA research centers on a variety of topics, including poultry nutrition, animal and plant diseases, food safety, biotechnology, and soil and water management.

So far in 2018, FAS has awarded fellowships to four female scientists. One of them is Stella Atim from Uganda, who works on animal disease control for her country’s Ministry of Agriculture. Atim is currently in the United States partnering with the University of Wyoming to develop a diagnostic test for brucellosis, an infectious disease that affects ruminant animals and can also spread to humans. Atim’s research has important public health implications for Uganda, where brucellosis in humans is often misdiagnosed as malaria.

While brucellosis has been eradicated from much of the United States, it still exists in wild bison and elk herds in the Greater Yellowstone Area of Wyoming and has been known to spread to local cattle herds. The University of Wyoming’s research efforts in this area are very applicable to the problems faced in Uganda, where brucellosis is often spread from wildlife to domesticated animals.

This year on International Day of Women and Girls in Science, FAS salutes Borlaug fellow Stella Atim and all the current and past female scientists in the Borlaug program who are paving the way for more women and girls in science.