In 2020, Japan moved up from the fifth to the fourth-largest U.S. agricultural export market, with exports valued at $11.5 billion. This occurred despite a 2-percent decrease from 2019’s $11.7 billion export value. The United States maintained the No. 1 market share for Japan at 24 percent, followed by the EU27+UK at 13 percent and China at 12 percent. In October 2019, the United States and Japan signed the United States–Japan Trade Agreement (USJTA), making more than 90 percent of U.S. agricultural exports to Japan duty-free or eligible for preferential tariff access. The largest export growth for U.S. agriculture to Japan was in pork (up $102 million), soybeans (up $93 million), dairy (up $40 million), and wheat (up $26 million). The largest reductions were in corn (down $155 million), processed vegetables (down $32 million), tree nuts (down $30 million), and fresh fruit (down $9 million). Despite these declines, Japan maintained its position as the top market for U.S. beef & beef products, rice, and hay. 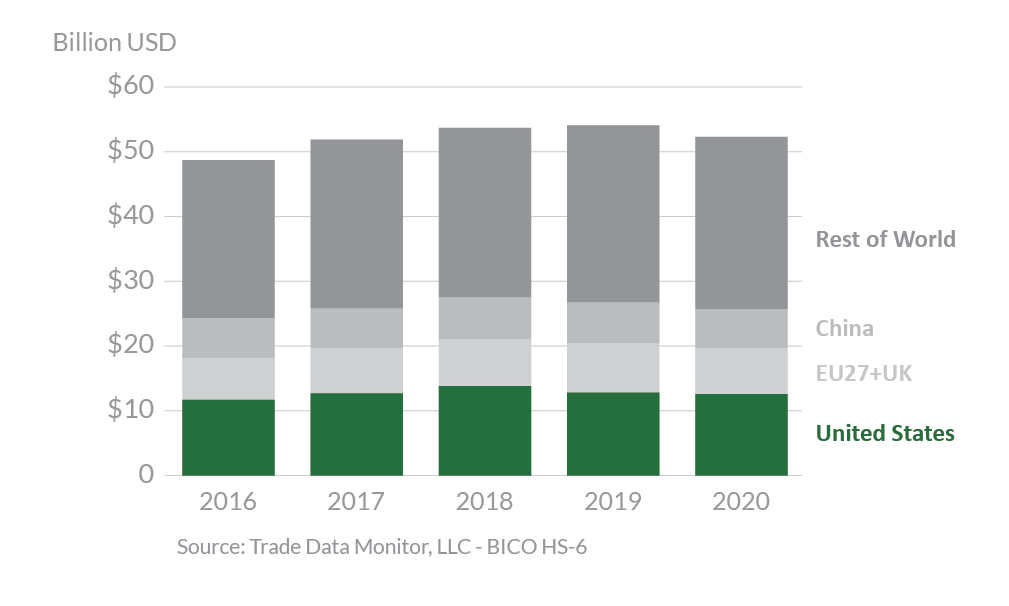 Reductions in tariffs on the largest agricultural producing nations, including the United States, will continue to drive competition in the Japanese market in the short term. As Japan recovers from the COVID-19 pandemic and demand for key products such as beef and pork return to pre-pandemic levels, the United States stands to significantly improve market share and export values. However, Japan’s declining population will limit opportunities for long-term growth in the United States’ fourth largest agricultural export destination. Several products, most notably rice, were excluded from Phase One of the agreement and remain at a market access disadvantage compared to competing nations. The United States will continue efforts to improve market access and achieve an equitable trade environment in Japan.