Opportunities for U.S. Snack and Confectionery Exports to Latin America

Two key free trade agreements – the Dominican Republic-Central America Free Trade Agreement (or CAFTA-DR) and the U.S.-Panama Trade Promotion Agreement – have stimulated U.S. agricultural exports to Latin America and created new markets for U.S. exports of snacks and confectionery goods thanks to reduced tariffs on processed food products.
Over the past five years, U.S. snack food and confectionery exports to the CAFTA-DR countries (Costa Rica, El Salvador, Guatemala, Honduras, Nicaragua, and the Dominican Republic) have grown nearly 15 percent, from $148.5 million in 2015 to $170.2 million in 2019, with wheat and corn-based snacks, cookies, and frozen pastries performing particularly well. In Panama, total U.S. snack and confectionery exports have remained steady over past five years, totaling $60.5 million in 2019, with sales of corn chips, nuts, and sugar confectionery all experiencing multi-million-dollar growth.
Because of the economic impact of the COVID-19 pandemic, the value of U.S. snack and confectionery exports to CAFTA-DR and Panama declined 24 percent from January to October 2020, but the market is expected to recover in 2021.
NOTE: For purposes of this report, snack food and confectionery products are defined as: baked snack foods, mixed nuts, potato chips, prepared peanuts and peanut butter, chocolate, sugar confectionery, chewing gum, and all sub-categories of these products.

Strong population and economic growth rates in the CAFTA-DR countries and Panama are expected to drive continued expansion of snack product imports. From 2015 to 2019, the combined population of these countries rose by more than 3 million, to reach 60.4 million, and this total is projected to increase an additional 4 million by 2024. An expected 10-percent increase in the number of urban residents by 2024 bodes especially well for U.S. snack food exports since city dwellers tend to be pressed for time and turn to snacks for rapid sources of nutrition or satiation.
The growth of the middle class population is a key component of the economic expansion in the region. Middle-class consumers have the discretionary income to buy snack foods and they are more likely to purchase food at modern retail centers. In Panama and the CAFTA-DR region (minus El Salvador) IHS Markit projects that the number of households with incomes above $20,000 per year will increase by more than half million, to approximately 5.3 million, by 2024. Regional gross domestic product (GDP) is also anticipated to rise, from $353.4 billion in 2019 to $390.5 billion in 2024.
Expansion of urban areas and reduction in poverty will drive demand for snack food and confectionery products in the region. Euromonitor projects that the total size of the marketplace for snack products in the CAFTA-DR countries and Panama will grow 31.7 percent over the next five years, from $4.1 billion in 2019 to $5.4 billion in 2024. The confectionery market will see a similar boom as younger people gravitate to sweets, and this is expected to lead to significant growth in sales of chocolate candy, sweet biscuits, snack bars, and fruit snacks in particular. Due to preferential trade relationships, most U.S. snack and confectionery exports to CAFTA-DR and Panama are not subject to tariffs, therefore creating substantial opportunities for companies to sell their products and increase overall market share. 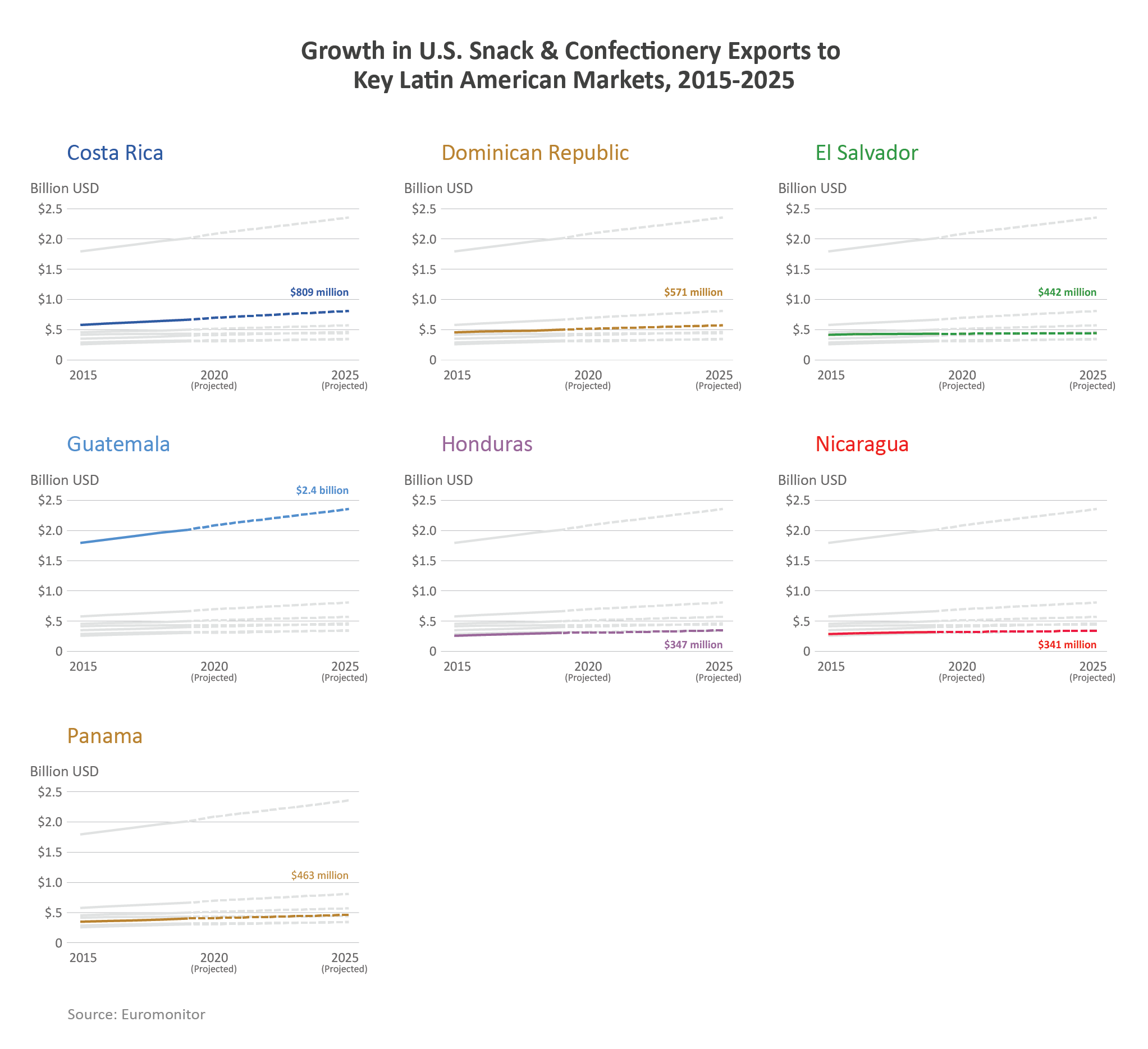 Northern Triangle
In the Northern Triangle region of Guatemala, Honduras, and El Salvador, consumers have an affinity for the quality, reliability, and taste of imported snack products from the United States. Consumption of chocolate confectionery is popular, particularly around holidays, and the younger generation enjoys savory potato chips and cheese-baked snacks. Since 2015, U.S. exports of snack and confectionery products to the Northern Triangle have grown 6.3 percent, reaching $74.1 million in 2019. By 2024, the total retail market for these foods is projected to increase by $800 million, to reach $3.2 billion, with confectionery sales alone exceeding $1 billion. Future market growth is a prime opportunity for U.S. exporters, particularly as urbanization continues and supermarkets replace local retailers to serve the growing middle class.
Costa Rica
Costa Rica is among the richest countries in Central America and is in the midst of a long-term population boom that is projected to lead to 5.5 million total residents by 2030, up from 5.1 million in 2019. As disposable incomes have risen in Costa Rica, so too have U.S. exports of snack and confectionery products, which grew 12 percent from 2015 to 2019. The retail market for chocolate and sugar confectionery is robust and expected to increase by more than $40 million by 2024. E-commerce and delivery services have blossomed during the COVID-19 pandemic and this trend is expected to continue as middle- and upper-income consumers seek high-value, nutritious snack products online. (For more information, see the FAS report Costa Rica: Retail Foods 2020.)
The Dominican Republic
Rising per-capita GDP and population have significantly boosted retail food sales in the Dominican Republic. The number of supermarkets has doubled in the last 20 years and the average store size has grown from approximately 350 square meters in the early 1990s to 10,000 square meters in the 2000s. Rising consumer incomes and close cultural ties with the United States have stimulated demand for an increasing number of imported U.S. snack selections. Snack and confectionery exports grew 43.7 percent over the last five years, to reach $44.2 million in 2019. Candy is frequently consumed at social gatherings in Costa Rica and sales are expected to surge with the return of parties and gatherings after the COVID-19 pandemic. (For more information, see the FAS report Dominican Republic: Retail Foods 2020.)
Nicaragua
Nicaragua’s poverty rate has declined markedly in recent years, leading to a significant increase in per-capita consumption. In 2019, the top U.S. snack food export to Nicaragua was chocolate at $2.4 million, followed by baked snack foods at $1.7 million. The total retail markets for both savory snacks and confectionery products are projected to grow by more than $20 million by 2024, making Nicaragua a promising market for U.S. exporters.
Panama
A large U.S. expatriate community and strong business environment make Panama an attractive market for exporters of snack and confectionery products. Panama is the richest country in Central America, with a per-capita GDP of $24,584 in 2019. Its economy is projected to grow significantly, with the middle class expanding 10.7 percent by 2024. According to Trade Data Monitor, the United States supplies nearly 40 percent of Panama’s snack food and confectionery imports. Many U.S. exporters find there is no need to relabel products for retail, saving significant cost and time.
Over the last five years, U.S. corn chip exports to Panama have increased from $7 million to $9.8 million, while sugar confectionery exports rose 44.3 percent to reach $4.3 million in 2019. As Panama’s economy continues to expand, so too will its market for snacks and confectionery. Euromonitor projects that total sales of sweet biscuits, snack bars, and fruit snacks will continue to grow, and gourmet popcorn blends have increased in popularity. Going forward, Panamanians’ appetites for healthy snacks, especially low-fat, gluten-free, and baked products, will present additional opportunities for expansion of U.S. exports. (For more information, see the FAS report Panama: Retail Foods 2020.)

Future economic expansion in the CAFTA-DR countries and Panama is closely tied to the recovery of the U.S. economy from the COVID-19 pandemic. Many countries in the region depend on U.S. remittances for significant contributions to their GDP. In the first half of 2020, the Northern Triangle countries of Honduras, Guatemala, and El Salvador each experienced their largest percentage declines in remittances since the global economic recession of 2009. However, remittances are rebounded in the second half of 2020 as unemployment lessened in the United States. Additionally, Panama and El Salvador deploy the U.S. dollar as national currencies, closely tying their economic performance to that of the United States.
E-commerce has emerged as a popular platform for purchases of snacks and confectionery products during the 2020 pandemic, particularly in higher-income countries such as Costa Rica and Panama. Opportunities abound for smaller niche producers of chocolates and other desserts to capitalize on the emergence of digital retail space and U.S. exporters can deploy their existing websites to target clientele in the region.
Another significant industry trend in Central America is health-conscious snacking. Middle-and upper-income consumers are seeking healthier products, such as foods low in sugar, sodium, or fat. At the same time, obesity has emerged as a public health crisis within many CAFTA-DR countries. Governments have responded by carrying out healthy-eating awareness campaigns, implementing regulations surrounding snacking in schools, and considering front-of-package nutrition labeling.
Trade Policy, Trade Agreements, CAFTA-DR, Panama Trade Agreement, Exporting, Virtual Trade Events
Western Hemisphere, Costa Rica, Dominican Republic, El Salvador, Guatemala, Honduras, Nicaragua, Panama
Processed Food Products

USDA estimates and forecasts for cotton supply and demand are on an August-July marketing year (MY) for all countries, while estimates published by many governmental or private groups in other countries are based on local MYs. The local MY for India is October-September.
International Agricultural Trade Report

Mexico is the third-largest pork importer in the world and traditionally the largest U.S. market for pork exports by volume. Over the past few years, shipments to this important market have faced headwinds. First, retaliatory tariffs related to Section 232 actions disadvantaged U.S. product. Then the coronavirus pandemic and a weak Mexican economy weighed on demand.