U.S. corn exports were up $1.6 billion (20 percent) from a year ago to $9.2 billion in 2020. Strong feed demand in China contributed to this sharp increase, as did China’s implementation of the Phase One Agreement. Exports to China totaled $1.2 billion, the largest since 2012. China became the third largest destination for U.S. corn in 2020 after Mexico and Japan. The top three markets accounted for 62 percent of total U.S. corn exports. The sum total of U.S. corn exports to Colombia, South Korea, and Guatemala, three U.S. free trade partners, was up $424 million over 2019. 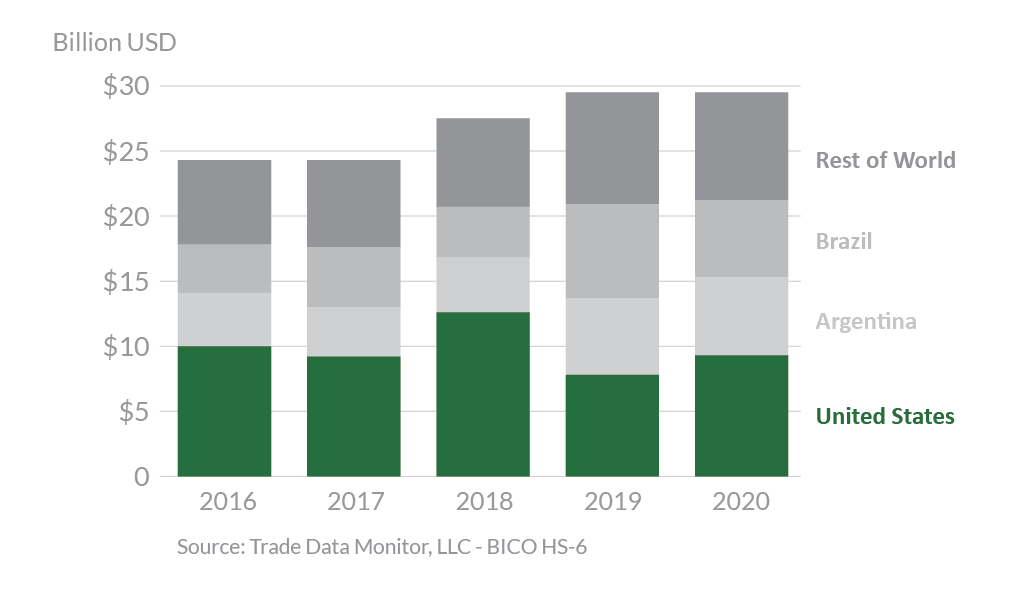 U.S. corn is expected to remain competitive, with ample supplies and reduced competition from Ukraine, Argentina, and Brazil. Ukraine’s exports are forecast to be smaller (-17 percent) than the previous year due to a smaller crop. Corn prices in the South American countries remain elevated, reflecting tight stocks and strong domestic feed demand for animal production and meat exports. Moreover, Brazil’s corn is expected to come onto the market later than usual due to slow planting in the Center-West impacted by delays in the soybean harvest.

U.S. corn exports to China are expected to be stronger. At the end of January 2021, sales to China for delivery in 2021 stood at a record 11.6 million tons. China’s demand for competitively priced feedstuff should remain strong as its swine sector continues to rebound from ASF. High corn prices in China, which were nearly double those of U.S. corn at the end of January, are also expected to stimulate demand for imports.

With reduced competition, U.S. corn is expected to expand its market share in traditional markets in Asia and the Western Hemisphere, while rebuilding market share to countries in North Africa. In fact, U.S. sales and shipments to North African countries are off to a good start. At the end of January 2021, they totaled 750,000 tons compared to none a year ago.